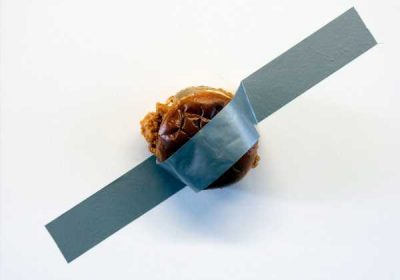 Art is as much about timing as anything else. For instance, the idea of presenting a white canvas as art might seem absurd, but when Robert Rauschenberg did it in 1951, white was apparently exactly what the art world was pining for. The same could be said for duct-taping a banana to a wall and pricing the "work" at $120,000: It wouldn't necessarily fly in every era, but in 2019, Maurizio Cattelan's Comedian—presented last week at Art Basel in Miami Beach—quickly became the biggest art sensation of the year.

The same could be said for artist David Datuna. Plenty of people could have had the idea to eat Cattelan's $120,000 banana as "performance art," but Datuna was at Art Basel and actually did it before anyone else. Good timing! And heck, the same could be said for Popeyes, too. Yes, I'm talking about the famous Louisiana fried chicken fast food chain/conceptual artist.

Also seeing an opportunity to piggyback off of Cattelan's Comedian, Popeyes—which despite its Louisiana roots is actually headquartered in Miami—decided that its own fervor-inducing chicken sandwich was worthy of the artistic treatment, duct tape and all. According to the chain, "just hours" after the banana began to go viral, "the beloved Louisiana brand partnered with San Paul Gallery Urban Art to display a real Popeyes Chicken Sandwich duct-taped to a canvas as one of the art pieces exhibited during the week." The piece was dubbed The Sandwich, and immediately listed at $120,003.99—which is the cost of the sandwich plus the requisite $120,000 that any food item duct-taped to a wall apparently commands.

"The delicious-looking installation was displayed over the entire weekend, with thousands of visitors stopping by to take photos," Popeyes continued. (For the record, though the San Paul Gallery is in Miami, it's located across the bay from Miami Beach, miles away from where the banana was.) "When an art lover finally decides to buy it, profits from the sale will go directly to the Popeyes Foundation, a non-profit organization that helps communities with food and support in times of need."

The move certainly makes for a good publicity stunt, but though timing is important, the reputation of the artist is what brings in the big bucks—and whether Popeyes has any artistic cred is still yet to be seen. The chain only states that "a buyer has already inquired about purchasing The Sandwich," but a sale has yet to be completed.

And speaking of timing, this art may have sold a lot faster back when the whole Popeyes Chicken Sandwich shortage was happening. But hey, that's the difference between renowned international artist Maurizio Cattelan and the head of marketing for Popeyes.