A posh pub in Yarmouth, Isle of Wight, is charging customers £2 to remove ingredients from its meals. A snapshot of The George Hotel and Beach Club menu has surfaced on Twitter and has caused great debate over whether it is deemed acceptable to charge those wanting to leave items out of a dish.

The George Hotel and Beach Club is said to offer a “perfect lunch setting”.

There is a Conservatory which is a “family friendly brasserie style restaurant” offering “fabulously unfussy food” with dishes created and cooked from the “wonderful natural Isle of Wight larder”.

The beach bar and kitchen, on the other hand, offer a unique view of the Solent whilst serving pizzas.

But the pricing on the menu has been criticised. 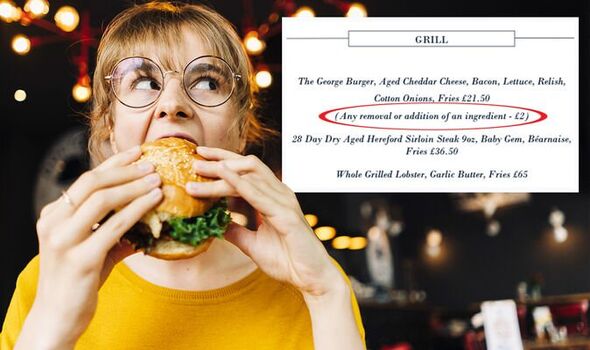 Harry Wallop posted the image of the menu on Twitter and added the caption: “£2 to *remove* an ingredient from a burger??!!

“At a pub on the Isle of Wight. [spotted by colleague over on Instagram].”

The image of the menu had arrows pointing to the possible price change.

Under the grill options, and in brackets, customers are told: “Any removal or addition of an ingredient – £2.”

The George Burger, which comes with aged cheddar cheese, bacon, lettuce, relish, cotton onions, and fries is priced at £21.50.

Customers wanting to remove one ingredient, for example, the bacon would be charged an extra £2.

Anyone wanting a plain burger and fries would pay an extra £10 to remove the cheese, bacon, lettuce, relish, and onions.

The price of said plain burger and fries could then be £31.50. 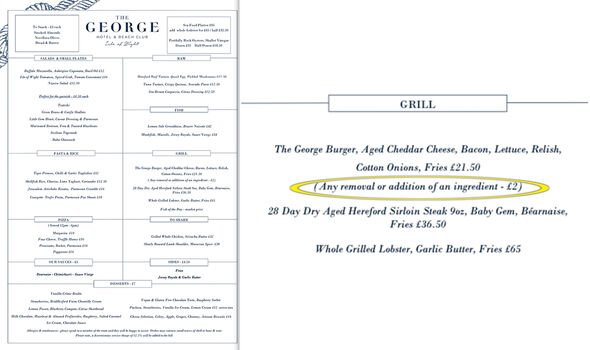 Patrick Kidd on Twitter commented: “£21.50 for a burger in a pub is immoral to start with, before you get to adding £2 for removing the lettuce.”

But it’s not just the additional £2 for “removing or adding ingredients” that has infuriated those on social media.

Others spotted the prices of the rest of the dishes on the menu.

David Bertram wrote: “Anywhere that charges £55 for lobster is no ‘pub.’”

Express.co.uk contacted The George Hotel and Beach Club for a comment.

A spokesperson explained: “This was an unfortunate instance of an employee misinterpreting a discussion regarding extra toppings for our burger and they took it upon themselves to add a sentence to the menu which made no sense at all.

“As soon as the mistake was spotted, the menus were all reprinted and the employee will not ‘fiddle’ with the menu going forward.”

However, the online sample al a carte menu still states “Any removal or addition of an ingredient – £2”.

Express.co.uk has also asked the hotel and beach club for an explanation of the high price points on its menu.