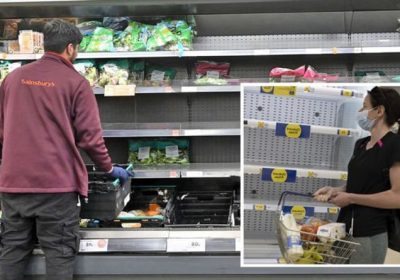 Consumer experts recently suggested everyone buy early this year to avoid disappointment around Christmastime. Now, shoppers are being warned of a “tsunami” of supermarket price rises as more and more food shortages are announced amid the ongoing lorry driver shortage crisis.

David Sables, Chief Executive of negotiations specialists Sentinel Management Consultants revealed British food suppliers have bagged a five percent price increase from grocery chains which is expected to be passed on to consumers.

David told The Grocer: “We have seen suppliers negotiating around five percent increases. Many are starting to come to fruition. Retailers will try to soak it up. Most likely is consumer price increases.”

And one supplier told The Mirror: “A tsunami of price increases is heading towards supermarkets. Some suppliers are hanging on by their fingernails.”

However, Morrisons boss David Potts has said they will do everything they can to “mitigate price points”.

It comes as a shortage of a key ingredient used to make pasta is also said to lead to a surge in prices at supermarkets.

An industry food expert has warned shoppers could end up paying 50 percent more at the tills due to a lack of durum wheat being produced in Canada – one of the world’s biggest suppliers.

This is because of drought and high temperatures that hit the country over the summer leading to a 90 percent rise in prices of durum wheat.

Italy, who is another big producer of the key ingredient is also experiencing supply issues.

Jason Bull, a Director of Eurostar Commodities, said food prices in the UK could rise from as early as next month.

He told The Guardian: “The market is completely out of control and as a result there has been an approximately 90 percent increase in raw material prices as well as increases in freight.

“This is a dire situation hitting all semolina producers and all buyers of durum wheat across the globe. Companies are buying at record high prices.”

Pictures of empty supermarket shelves have been seen for weeks now and Ian Wright, Chief Executive of the Food and Drink Federation, said the supermarket supply issues will “only get worse”, as the market continues to change following the pandemic.

But, he did emphasise that “these shortages don’t mean you’re going to run out of food” and said there will be less variety when it comes to a specific product.

“The UK shopper could have previously expected just about every product they want to be on shelf or in the restaurant all the time,” he explained.

“That’s over and I don’t think it’s coming back.”

However, sources from Downing Street has suggested the empty shelves should begin to refill “by Christmas”.

Boris Johnson’s spokesperson dismissed the industry’s predictions that customers are no longer able to whatever they want at any hour of the day.

He told the Independent: “We reject those claims.

“We have got highly resilient food supply chains which have coped extremely well in the face of challenges and we believe that will remain the case.”