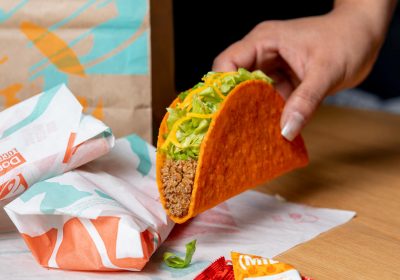 To be honest, Taco Tuesday doesn’t really have the same magic that it used to before life under quarantine. That might have something to do with the fact that the days blur together, with little to distinguish a Tuesday spent locked at home from a Friday or even a Sunday.

Luckily, for those with the ability to safely visit a Taco Bell, this particular Tuesday is set to be a special one. During these desperate times, Yum! Brands’ purveyor of budget Mexican cuisine is giving away free Doritos Locos Tacos, with no strings attached.

Seriously, all you have to do is get to a Taco Bell TODAY, April 7, pull up to the drive-thruand politely ask for a Nacho Cheese Doritos Locos Taco, free of charge. There’s technically no purchase necessary, but since when has anybody gone to Taco Bell just to get one taco and nothing else? I think that’s pretty much impossible according to the universal laws of fast food physics that I just made up in my head.

This isn’t the first time Taco Bell has taken to offering free tacos in these trying times. Today’s giveaway comes just a week after a similar deal for a free Nacho Cheese Doritos Locos Taco (that really is a mouthful), and I guess they figured that the free tacos should continue until morale improves. Taco Bell has also done similar taco giveaways tied to major sporting events like the World Series and NBA Finals. But as you’re probably painfully aware, sports kind of aren’t happening right now.

So with that in mind, stop what you’re doing and drive down to the nearest open Taco Bell drive-thru and claim what’s rightfully yours amid these fraught times. Just don’t be a jerk about it, because those Taco Bell employees (who do a great service even under normal circumstances) certainly deserve your respect, patience, and appreciation right about now.