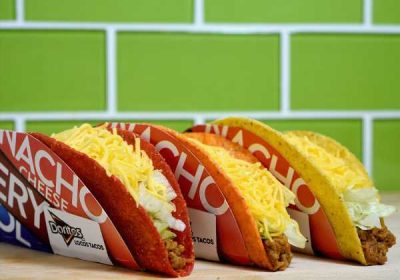 Fast food menus follow a spectrum. At one end are chains like In-N-Out, featuring a minimalist menu of tried-and-true favorites that rarely changes. Taco Bell leans towards the other end: chains with a large menu regularly accentuated with buzzworthy new items intended to lure in customers. The problem with the latter strategy is that menu bloat becomes almost inevitable. And so Taco Bell has decided it's time for a little autumn "spring cleaning" — streamlining their menu and axing nine items altogether.

Likely the biggest names getting the boot are two of Taco Bell's popular Doritos Locos Tacos flavors. Both Cool Ranch and Fiery Doritos Locos Tacos have been sent packing. But probably a more surprising removal is the Double Decker Taco. I hate to admit it, but I was a fan. Plus, the Double Decker Taco is just a soft tortilla shell wrapped around a crunchy taco, so it wouldn't appear that Taco Bell is reducing the number ingredients behind the counter by getting rid of this one. As for the rest, customers can also say goodbye to the Beefy Mini Quesadilla, Chips & Salsa, the Chipotle Chicken Loaded Griller, the Double Tostada, the Power Menu Burrito, and the XXL Grilled Stuft Burrito.

As part of the refurb, Taco Bell has also switched up its combos. The company says the plan is "to help make ordering easier" — though they also admit that if you had a go-to combo order, its number has probably changed (for instance, 3 Crunchy Tacos Supreme has gone from #3 to #1), meaning you'll want to consult the menu once the changes take effect.

Speaking of which, the new menu isn't set to debut until September 12 — so between now and then, it's time to get your fill of Double Decker Tacos. After that, you're going to have to ask the cashier, "Hey, could you — like secret menu thing — take a soft taco shell and put some refried beans on it and wrap it around a crunchy taco? I know it's not 'on' the menu, but I know you have that stuff back there, and, seriously, it was on the menu like two days ago. Come on!"