The Guav-A-Rita Is Here And It's Perfect For Summer 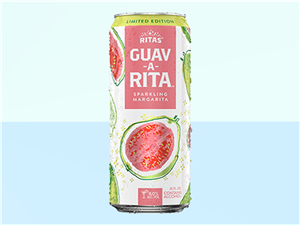 At this point, we know that one of two things will be true about summer 2020: it will either be painfully brutal as most if not all of the country is locked indoors and feeling miserable, or a renewed (but necessarily cautious) sense of freedom after so much time locked away instantly makes it feel like the best summer of our lives.

Either scenario calls for drinking, so it’s probably good news that there’s a new if perhaps unorthodox flavor of canned sparkling margarita hitting the market. The latest manifestation of AB InBev brand Ritas’ never-ending quest to make a margarita out of seemingly every fruit flavor possible is… the Guav-A-Rita.

Billed as a limited edition flavor for summer 2020, this tropical treat is based around a fruit that, while popular in parts of both the eastern and western hemispheres, registers as somewhat exotic here in the states. Though there are many varieties, its taste is described as “unique, sweet, and almost universally pleasant,” with a flavor somewhat akin to a strawberry-pear fusion.

That’s all well and good, but here are the details that matter when it comes to the Guav-A-Rita: like other members of the Rita family (which includes Lime-A-Rita, Water-Melon-Rita, Straw-Ber-Rita, etc), this sparkling margarita beverage weighs in at eight percent alcohol by volume. Photos on Untappd suggest it looks very pink once it’s poured, and It’s available in massive 25-ounce cans. Why it’s hyphenated as “Guav-A-Rita” instead of just “Guava-Rita” remains a mystery, however.

Similar to restrictions on public gatherings, this is a limited edition summertime offering that won’t be around forever. So wherever you find yourself stuck this May, June, July, or beyond, chug some spiked sparkling Guava to pass the time. At least for one fleeting moment, it’ll feel like going on a very sugary vacation.