The Long, Curious, Profoundly American Journey of the Churro 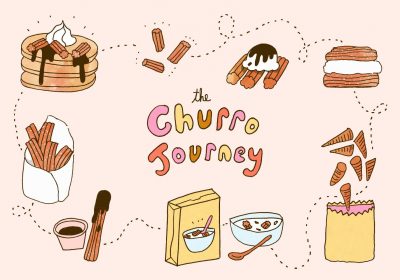 Part of the Mexican American experience is realizing that everything you thought you knew about yourself is wrong. You go through life thinking you’re Mexican, only to find that you’re Chicano, because you were born in the United States. You think Mexican is a race, then you figure out that it’s not — that, more than likely, you’re a mix of a whole lot of things. This process plays out in cuisine, too. You think churros are a Mexican thing, because your beloved food cart lady sells them along with wagon wheels and Takis, and then you find out no one really knows where they came from.

I’ve been thinking about this lately because churros — those long, ridged cinnamon-sugar-dusted fried choux pastries — have sprung up as the flavor du jour in American food products. In the past year, Trader Joe’s debuted Churro Bites, described by the grocery chain as “golden nuggets of churro-riffic goodness”; General Mills introduced churro-shaped Cinnamon Toast Crunch; and 7-Eleven began selling limited-edition churro-flavored Bugles. They seem to be on the rise everywhere, popping up at Cinnabon in the form of Churro Swirls, at IHOP on top of pancakes, and in ice cream shops as a hip new flavor. This spate of churro-flavored snacks and sweets comes on the heels of restaurant chefs taking an interest in the pastry — Datassential, which collects data on food trends, noted last year a 33% increase of churros appearing on menus since 2013, calling them a “blank slate” for restaurateurs.

When I started seeing churro-flavored cereal and churro-topped pancakes, my knee-jerk reaction was to protect churros. So often, Mexican foods are commercialized in ways that leave the people who created them behind; I think of how margaritas (or “margs”) are so integral to Cinco De Mayo, while Mexican immigrants continue to be devalued in the U.S. But on closer inspection, the churro has had a convoluted journey to the U.S. — one that has a lot to say about how food travels from culture to culture — and I’m no longer convinced that churros can, or should, be saved from adulteration.

No one (not even churro experts) is really 100% clear on where the churro originated. One popular tale puts the churro’s origins in China. A pastry called youtiao, eaten at breakfast, supposedly made its way toward the Iberian peninsula via Portuguese sailors. Another origin story credits Spanish shepherds with inventing the churro and claims the ridged horns of the Churra sheep inspired the name. Wherever the churro originated, European colonial efforts in the Americas changed it irrevocably. Spanish conquistadors introduced churros to the Western Hemisphere and adopted an indigenous Mexican beverage to serve them with. Mexican dipping chocolate, or champurrado, has Aztec origins as a chocolate-based atole that was prepared with lime-treated corn dough and water or milk.

For most people living in the U.S., it’s the Latin American interpretation of churros that’s most familiar. But besides Latin America, the other association many Americans make with churros is, of all places, Disneyland. The theme park in Anaheim, California, has been selling churros since the ‘80s and probably deserves as much credit as anyone for churros’ current status as the hot new snack flavor.

According to Kenzie Wilson, a public relations representative of Disneyland Resort, it all started in 1985 with the planned opening of an outdoor amphitheater geared toward teens called “Videopolis.” A Disneyland food and beverage manager named Jim Lowman came across a churro booth at the Long Beach Grand Prix and thought it would be the perfect addition to Videopolis. Lowman decided to make Disneyland’s churros longer than the ones he’d encountered at the Grand Prix — 12 inches instead of six — and they sold out in the first day.

Over time, Disneyland began treating its churros as a blank slate for other flavors. These days, park-goers can order a sour apple churro served with optional caramel sauce. There’s a crushed pretzel and peppermint churro, a gingerbread churro, a sugarplum candy churro, and churro bites with eggnog gelato. It’s a good example of how comfortable Americans are taking liberties with the churro. Perhaps its was only a matter of time before food corporations decided not merely to flavor churros like other sweets, but to also flavor other sweets like churros — like, say, pancakes.

For the International House of Pancakes, which has been selling Mexican Churro Pancakes since April, the churro was a match made in heaven. Its origins span the globe, and it’s a snack that can be enjoyed at any hour of the day — fitting for a chain that sells breakfast foods 24/7. Alisa Getlin Gemlich, VP of marketing at IHOP, told me that the pancake franchise chose churros as a pancake topping for their familiarity. “The beauty of a churro is that it’s something that everybody knows. It doesn’t matter if you’re in Des Moines, Iowa, West Coast, or East Coast — everybody knows what it is, and even if you have a different perspective of what it might be, it has that classic flavor that comes through,” she says.

But for me, although I’m aware of the churro’s international origins, the sweet snack feels distinctly Mexican American. The perceptions of it mirror, perhaps a little uncomfortably, the narrative of my people: It is seen as a low-cost option, exotic but familiar, and a go-to that can spice up a menu and titillate when it is elevated. The gist is that the churro is a common food, and dressing it up or reimagining it as a corn chip or a breakfast cereal is mischievous and exciting.

But any way you slice it and fry it, the churro is an immigrant. What remains to be seen is if it will, thanks to mainstreaming from distinctly American institutions, lose its racial coding altogether or if it will retain its air of “otherness.” It’s that exoticized element, after all, that’s making them such popular additions to menus, where their appearance can be read as familiar and fun at the same time. My prediction is that churros will eventually lose their cultural connotations but retain a campy, Latin vibe, like the poor “marg.” At least we know that, no matter what happens, churros will still be delicious — although I can’t necessarily say the same about churro-flavored corn puffs.