The 'One Chip Challenge' Is Back and Hotter Than Ever 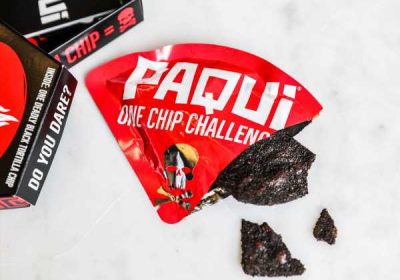 If you use social media — or watch the local news when they have too much time to kill — you've probably seen the "One Chip Challenge." Back in 2016, the spicy tortilla chip specialists at Paqui jumped on the public's love of viral challenges — especially those that involve an insane level of spice — and introduced packages of a single chip spiced with real Carolina Reaper Peppers, holder of the Guinness World Record for world's spiciest pepper. Suddenly, "bet you can't just eat one" took on a completely opposite meaning. Now, the #OneChipChallenge is back with a new look and — somehow — even more spice.

After a limited launch today with an already sold out presale, Paqui's Carolina Reaper Chip will get its official release on Friday, September 13. This time around, the $6.99 chip "looks as deadly as it tastes," according to the brand, arriving as a blue corn chip covered in an "intense amount" of black Carolina Reaper seasoning. As in the past, the individually packaged not-quite-a-snack is sold in a coffin-shaped box.

"For the last two years, we've received everything from love letters and polite requests, to absolutely desperate pleas for us to bring back the #OneChipChallenge," Paqui Brand Manager Caitlin Moralic said in the announcement. "While Paqui has a line of truly spicy chips perfect for everyday snacking, our fans want to test themselves with even more real peppers and real heat, and we're excited to bring them the spiciest challenge yet…. Incorporating the Carolina Reaper in the #OneChipChallenge is a fun — albeit sometimes painful — way for our fans to see whether or not they can handle the heat."

Want to get your hands on one? Masochists, the curious, and those in need of social media content can all go to paqui.com/onechipchallenge this Friday starting at 9 a.m. CDT which will be the exclusive spot to score the "#OneChipChallenge, Hell in a Box Collector's Pack, Extreme Reaper Variety Packs, and more" while supplies last, according to Paqui.

Meanwhile, if you miss that opportunity, Paqui says customers can win one of the Carolina Reaper Chips by looking for specially marked bags of Paqui Haunted Ghost Pepper and Fiery Chile Limon chips at participating retailers starting in early October. Additionally, if you like winning stuff, Paqui will also be holding an online challenge: Share your #OneChipChallenge video on Twitter or Instagram and also include the hashtag #sweepstakes and tag @PaquiChips, and you could win "one of three grand prizes, which include a one-year supply of Paqui chips and a full tailgate package, complete with branded beer glasses, a Yeti cooler, and more."

But we all know the real way to be a winner is to try the One Chip Challenge yourself and go, "Oh, that wasn't bad at all." Because, come on, no one wants to lose to a tortilla chip.