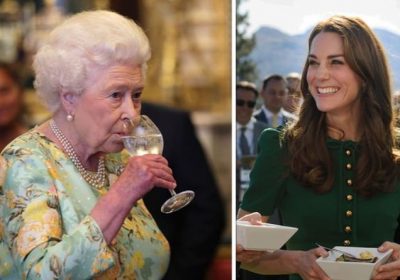 Duchess of Cambridge at the University College London

Some of the royal food rules include not eating garlic or avoiding seafood when travelling.

Her Majesty reportedly has her own number one rule when it comes to food: never revealing her favourite meal.

That is so she is not served the same food at every official dinner or visit.

“As one of her staff told me, ‘If she said she had a favourite meal she would never get served anything else,” a reporter from The Telegraph revealed.

The Duchess of Cambridge, however, broke this rule by mistake.

In 2018, the Duchess visited the Great Ormond Street Hospital, where she met and chatted with some children.

Speaking to four-year-old Rafael Chana who was waiting for a heart transplant she said: “I used to eat lots and lots of olives when I was little as well.”

A royal reporter who was at the official visit also tweeted: “The Duchess of Cambridge revealed today that her daughter, Princess Charlotte, loves olives and she encourages both her and Prince George to cook with her.”

Former royal chef Darren McGrady, however, has previously revealed some of the Queen’s favourite food.

“The Queen is a total chocoholic,” he said.

“The chocolate biscuit cake is the only cake that goes up to the royal table every day until it has all gone.

“Sometimes this means it following her to Windsor Castle for the weekend.

“I remember as a young chef travelling from Paddington to Windsor one Friday morning with a half-eaten chocolate biscuit cake packed neatly and tightly in a biscuit tin, and wrapped in Clingfilm, perched on my knee with the fear of God in me that I would lose or drop the thing!

“It was her favourite.

“And when Prince William first tried it, he loved it and then requested it as his groom’s cake [at the Royal wedding in 2011].”

The Queen reportedly hates two foods that are banned in the palace and from any royal menus: garlic and oysters.

According to former royal servant Charles Oliver, the Queen and the late Prince Phillip hated oysters.

“Inevitably there are one or two things the Queen and her husband do not like, and the hosts are duly warned in advance,” he explained in the book Dinner at Buckingham Palace.

“The palace instruction states only: ‘Neither the Queen nor the Duke of Edinburgh like oysters’.

“The Queen often drinks a glass of red or white wine with her meals as well as orange juice. His Royal Highness prefers gin and tonic or lager to champagne before meals or during the day.”