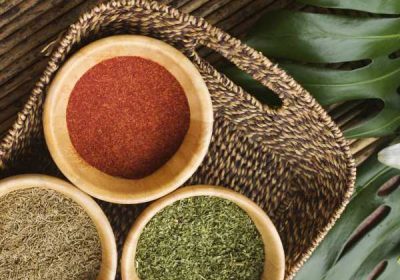 Unless you're extremely vigilant about your pantry, there are bound to be a few things that are past their expiration tucked into a cupboard. Some things can be consumed safely past their expiration date, but they might not have quite the flavor that they would when they were fresher. Like spices, for example.

I recently bought new red chile flakes after finally using up my giant container of them, and when I used them in a pasta dish, I found it to be way spicier than normal, thanks to the fresher, more potent chile flakes. I've definitely dug around for a bottle of spices that I don't use that oven, like, say, star anise, and realized that their best by date was in 2012. (Whoops.) It's a good reminder that spices might not go bad, exactly, but they can certainly get stale and less flavorful, meaning that you won't get exactly what you're looking for from a teaspoon of cumin or cinnamon.

But spices are expensive. You don't want to waste them, even if they're slightly—or very—stale and old. Good news! You don't have to throw away those past-their-prime herbs and spices. You can revive them in just a few minutes to, if not their full former glory, something a lot closer.

Watch: 16 Spices and Seasonings You Should Have in Your Kitchen at All Times

All you need to do to revive your spices is to toast them. This works particularly well with whole spices, like black pepper cloves and cumin seeds, but it'll help ground spices, too.

Here's how to do it: Grab a clean, dry skillet, and put it on a medium flame on your range. Put in the amount of the spice that you're going to use for whatever you're making and toast it for one to three minutes, shaking the pan or stirring with a spoon to make sure the toasting gets evenly distributed. When the spaces are very fragrant, that's how you'll know you're done. Easy, right?

There are a few best practices to keep in mind. First, only toast the amount of spice you'll be using—toasting the whole bottle won't work as well. Two, keep your eye on the spices as they toast. Spices can burn quickly, and there's no recovery once they do. The acrid taste will get into anything you use them on, so it's best to dump it and start fresh. But that's pretty much all there is to it. When you don't want to run out and grab new spices, grab a skillet instead.