Home » Everyday Meals » The Right Way to Wrap Anything in Bacon

The Right Way to Wrap Anything in Bacon 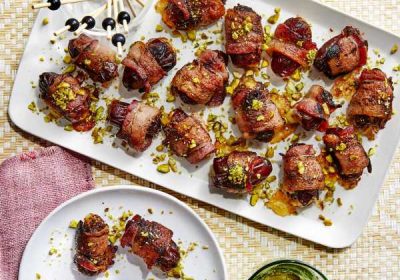 There are some recipe writers, and by some I totally mean me, that struggle with the presumption of skills. How much information about technique does a reader need to be able to get through a dish? Is the person likely to make this someone just shy of professional level in the kitchen, or are they a total newbie? You don’t want your recipes to be ten pages long, unless you know that the people really need all of that information.

Clarity is everything in recipe writing. And it has recently come to my attention that there is something a lot of recipes call for without full explanation, and that is how to properly wrap things in bacon. Which is something that never occurred to me until I was at a friend’s house for a party and one of their pals was attempting to wrap dates in bacon in such a totally wrong way that it took all of my strength to simply leave the kitchen and not jump in to correct them. I have learned that unless someone requests help in such situations, any offer comes off as criticism, and no one needs that while struggling with greasy meat in a party dress.

Let’s start with the bacon itself. As much as I love me some thick cut bacon, this is not the time to use it. Bacon wrapped around things is there for two reasons: to add fat and flavor. This means it needs to fully render during the cooking process, which means you don’t want whatever is being wrapped to get overcooked while you wait for bacon. Usually the bacon is also designed to have a crispy textural element, so for wrapping things up I always go with either thin cut or regular cut bacon.

Your technique will change depending on what you are wrapping, which usually will have to do with scale. Small things are different than big ones in the bacon-wrapping game.

These are your bacon-wrapped appetizers: dates, your scallops, your chicken livers, Brussels sprouts or baby potatoes, your canapé sized items. For these? I always use thin-cut bacon because I want it crispy around the outside. I also cut the bacon slices in thirds for really small stuff, and halves for slightly larger. In general, you want your bacon to just overlap by about a half an inch, you don’t want to wind it around and around, making a bacon mummy of your delicate nibble. Secure with a toothpick so that it doesn’t unwrap in the cooking process.

Here we are talking about your filet mignon steaks and the like. Here I use either thin or regular cut bacon, since the crispy factor is somewhat less important, and you are trying to bring fat to the party, so having a little extra is not a bad thing. And usually you are talking about using one full strip of bacon to encircle the item, maybe two stacked on top of each other if it is particularly thick. Here you want an overlap of about an inch at the ends, and if you are using two slices, an overlap of a quarter of an inch around the circumference. Again, secure with toothpicks to prevent losing the bacon during cooking.

This is when you want to create a bacon carapace around something like a pork loin, a boneless breast of turkey, a chateaubriand. For this you can use thin or regular cut. To wrap, lay out a sheet of plastic wrap on your counter that is about 8 inches longer than the item you want to wrap. Take your bacon and lay down a strip crosswise on the plastic about four inches from one end. For the next strip, overlap by about a quarter of an inch, and continue until you have a shingled rectangle of overlapping bacon slices that is slightly longer than whatever you are wrapping. Lay the item you are wrapping on top of the bacon, whatever side you want to be the top side when finished, down on the bacon. Take one or two half strips of bacon and place them over the ends of whatever you are wrapping if you do not want the raw ends uncovered. Using the plastic wrap, pick up the far side, and bring it towards you, wrapping that half of the item. Eyeball to see if your ends will meet and overlap by a half an inch or so on the seam. If your item is thicker, and there will be a gap run a single slice of bacon down the middle so that the seam is fully protected. Bring the plastic wrap side nearest you up and over, and peel back slightly if needed so that the bacon seam is able to self-adhere. Wrap the plastic wrap tightly over the wrapped item, and then twist the two ends to seal like a giant candy. Store this wrapped in the plastic in the fridge for at least an hour and up to overnight. You want the bacon to firm up around the meat and for the edges to seal themselves together.

When cooking, place the seam side down, which should then connect the bacon in the cooking so that it doesn’t unwrap. If you are concerned, you can tie the bacon-wrapped item in butchers twine at two-inch increments, but know that you are likely to lose a lot of the bacon when removing the twine, so if the bacon on the outside of the finished dish is important, try just to let the bottom cook and seal together to keep it all neat.