Home » Everyday Meals » The Trick for Making the Fastest, Crispiest Skillet Potatoes You've Ever Had

The Trick for Making the Fastest, Crispiest Skillet Potatoes You've Ever Had 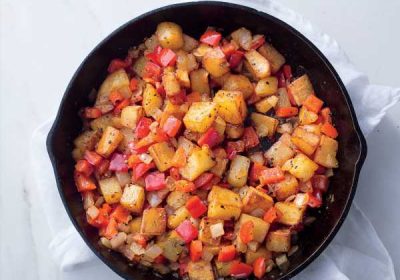 I will eat potatoes in any way, at any meal, any time of day, 365 days a year. And I’m not kidding. I love potatoes. One of my favorites is, not surprisingly, fried. But actual French fries are such a messy pain that the chances of my making them at home are not great. All of that oil! All of the clean up!

I discovered that sauteing diced or cubed or chunked potatoes in a little bit of olive oil in a saute pan was a pretty good replacement. But getting the potatoes cooked on the inside while achieving the perfect golden crust was still annoyingly fussy and time consuming. And it required a little too much concentrated “watching” for me. I wasn’t much interested in boiling the potatoes to pre-cook them (a common method).

And then I had a mini epiphany: the microwave!

I put the cut up potatoes in a microwave safe bowl with water to cover, and nuked them until they had just BEGUN to soften. Then I drained them, and put them in a skillet with about two tablespoons of hot EVOO and just concentrated on perfect browning. I quickly discovered that I was onto something good.

One thing that I discovered was that this was not a quantifiable process. The size of the potato dice or chunks, the strength of the microwave, the type of potato, and the age of the potato all affected the timing. So I cannot give you a foolproof amount of time. You’ll do this a few times, checking frequently for “almost” doneness, and figure out what works for you.

I also discovered that it was worth salting the water before microwaving. Not unlike pasta, this seasons the potatoes from the inside out, rather than just salting the outsides at the end.

One of the great joys of this method is that it allows you the ability to easily flavor the cooking oil without fear of burning the flavorings. Herbs don’t really have enough time to burn. Ditto spices. And after the potatoes are done, when feeling decadent, I add a splash (and just a splash—it’s potent stuff) of truffle oil.

While not an instantaneous method, this microwave shortcut is so simple, so quick, and so lacking in gallons of oil that I’m betting it will become a go-to for you from your first attempt.