The Way We Eat: Simonair & Mark Yoho in Columbus, Ohio 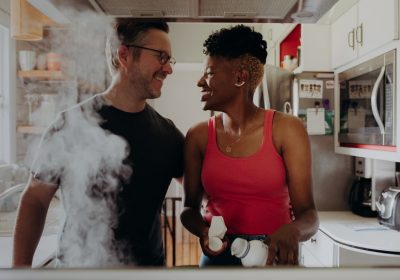 As a mom of two young girls, I am always looking for how other parents like me get it all done, so I was looking forward to talking with Simonair Yoho for The Way We Eat. Simonair lives nearby me in Columbus, Ohio, and does really beautiful, smart interior design work. She also has two young daughters about the same ages as mine. I talked to her about how she and her husband, Mark, share cooking responsibilities in a really admirable way, how her Caribbean heritage influences her cooking, and her favorite design solution in her kitchen.

Tell me about how you and Mark met.
Mark and I met during my first go around living in Columbus for work.

Tell me about the work you and your husband do.
I’m an interior designer with a big home goods store, and he’s in education. He travels for his line of work. I studied fashion and originally moved to Columbus to work at Abercrombie & Fitch, then moved into the home design space.

As an interior designer, what is important to you about the design of your kitchen?
Function & aesthetic! I need a blend of both aesthetically pleasing as well as functional. Cannot give up either. I have to be sure it works. We inherited our kitchen from the previous owners, but I keep thinking of how else we can improve things. For instance, why did they have such deep cabinets and not have a tray that rolls in and out? Our home is smaller and I am always thinking of ways to maximize space and organization for small space living.

So you added pull-out shelves, right?
Yes, we added roll-out shelves from the Container Store. I love these; they make everything so in reach. And they’re pleasing, because they have a little chrome finish (laughs). They fit into the cabinets just perfectly. So now my kids can access too. They just go and pull their snacks for the afternoon — it’s so easy for them. They know exactly where to go. I like the Montessori style; have a lot of things that are on their level.

How does cooking work within your schedule of two working parents?
We have no schedule. It’s just who wants to cook that day. Do you feel you want to make something today? Oh sure! And with having two little ones it’s really just organic. We’ll touch base during the day on dinner. If I have a good idea I’ll say, Oh I’ll make this. There’s constant communication. It’s not a defined role for either of us. It’s just really fluid in the way that we do dinners.

That’s so refreshing that neither of you has all the pressure of cooking on you, especially in the time of life when you have two little kids.
We both learned to be independent, and how to cook, from our moms. My mom was like, “You’re going to learn to make your own meals!” and it was the same for Mark as well. We both bring that to the table, hence why it’s probably more fluid. I can’t make something today, so Mark knows. We have that give and take. It’s nice to know you’re not always responsible for a meal. After a while you get burnt out.

How has grocery shopping changed for you since having kids?
Well, one was a little easier than two [kids]. (Laughs) Click and collect is the best thing. So cool to just be able to order all the things online and go and pick it up. But now when he’s in town my husband works from home, and on the weekends I go to my Zumba class with Jackson and on the way back we stop at Trader Joe’s. Little carts are the best thing! I’ll do a week’s shopping that morning, then go home and we all have a nap.

Are your kids in a picky eater phase right now?
Jackson is a very picky eater. She’s like, I don’t eat chicken unless there’s chicken nuggets. Ha! Which gets me every time; I mean, chicken nuggets are chicken! But OK.

So how do you handle that? Do you make two meals?
Well, if we do ravioli we’ll do that and maybe a chicken Parm and broccoli or a vegetable as our side. So Jackson will have her ravioli, and we’ll have everything else, and Baker will have everything else. So we’re not making two meals. It’s just one meal that is able to be portioned out for her and the rest of us.

What foods do you crave (and cook) most from the Caribbean?
I’ll make island stuffing, which people often say is sweet potatoes, but it’s not; it’s made from plain white potatoes. And then there are ingredients in it, like spices, and there’s some sweetness to it, there’s raisins. And all of this is added in so that by the end when you look at it you think Oh, it’s a sweet potato. But it is not, and it’s spicy. It has some heat to it. It has sweet and heat to it.

What are the skills and dishes you really rely on, or do automatically in the kitchen?
My automatic is that I can bake chicken and make it just right. No thought process; just here’s the seasoning. Put in the oven; it will be done just right.

A man-pot?
Yeah! (Laughs) Because like a woman would make a meal that is incorporating many pots, and a man is like, I have no time for this. He just chucks everything into one pot. So I’ve learned to make one-pot meals; everything goes into that one pot, and it’s made in a timely fashion so you have less cleanup.

What goes into your one-pot, man-pot meals most often?
Chicken, rice, peas, and your vegetable. Everything in that one pot.

Returning to your designer work, as a designer what needs to be beautiful to you in your space?
For me it’s the food; it needs to be colorful. I don’t like a one-color meal. I want to have several colors on my plate. That might be the Caribbean part of me.

But also in our dining room we have an expandable table so that was a big deal, having the space to have more family around when we want to. So that’s always important.

And then, it’s always been something: having a clean space where I eat. If I see something, in my eyesight, I have to move it. Something about the clean lines. A little bit of peace in the chaos that goes on with kids. We have a Roomba; it stays on heavy rotation. I said to the kids, you’re going to have to get used to this; it’s the only way we can make it! (Laughs)

Every Friday Jackson and I have a mommy and daughter time. I’ll pull out the sofa bed and we sit down and we’ll sit and eat ice cream together and just talk. I listen to her little talking, and it’s still around food.

Is there anything else that is just really important to you about how you eat?
No matter the meal, it’s all about spending time with family. That’s the biggest part of the evening for us.

Food is important as sustenance, but there is also that social part of food that we enjoy.

Every Friday Jackson and I have a mommy and daughter sleep over. I’ll pull out the sofa bed and we’ll sit and eat a snack or ice cream together and just talk. Food is a part of our everyday life as well as special moments.

The Way We Eat is a series of profiles and conversations with people like you about how they feed themselves and their families.

We’re actively looking for people to feature in this series. You don’t have to be famous or even a good cook! We’re interested in people of all backgrounds and eating habits. How do you overcome challenges to feed yourself? If you’d like to share your own story with us, or if you know of someone you think would be great for this series, start here with this form.