The Way We Eat: Summer Anne Burton, Vegan Editor and Writer in Austin 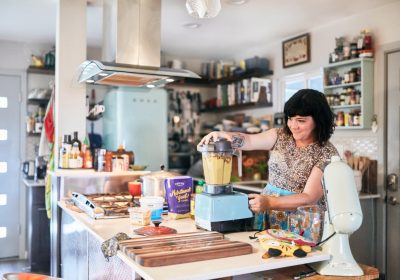 Summer Anne is a proud vegan who lives with her vegetarian husband, Peter; their two dogs, Jessie and Maude; and their cat, Kristofferson, in Austin, Texas. She’s also a former BuzzFeed staffer turned founder and editor-in-chief of Tenderly, a new vegan lifestyle magazine launching in July. Summer admits she didn’t always know how delicious veganism could be. “A defining feature of my personality and lifestyle is that I love to cook, but 15 years ago I was mostly eating frozen veggie burgers and PB&Js,” she says, until the day she discovered the secret to vegan queso and the magic of mushrooms. How does she eat? How does she craft her meals and love the vegan lifestyle in Texas? Here’s how.

You just started a new gig. Walk me through what a typical day looks like for you right now?
I am not a morning person, so I typically let my husband take care of our two dogs in the morning while I snore away until 10 a.m. After I wake up I make myself coffee at our home espresso station — my favorite previous job was “bookstore barista,” so I have a real fondness for pulling espresso shots. Then I check email and Slack and have a couple of phone calls with contributors.

I usually forget to eat anything until around noon — I love breakfast food, but I’ve never been super hungry in the mornings. I will eat a bowl of Cheerios or a grapefruit, and then snack on any leftovers in our fridge throughout the afternoon.

We hang out with our friends regularly — we watch silly YouTube videos, play Dungeons & Dragons, or have potluck dinner parties. When people come over, I always cook a ton of food — usually way more than we need. Some nights we see a movie with my dad, or if my mom’s in town we might all go to dinner. On nights when it’s just me and Peter, we watch TV or movies (currently leading Peter through a rom-com education) and hang with our pets, and I usually make us dinner with whatever is in our pantry and fridge.

When I’m feeling lazy, we order delivery — almost always either from our favorite pizza spot or Chinese takeout with generous amounts of tofu.

What’s your biggest struggle in feeding yourself?
Time! I love cooking and I’m privileged enough not to have to stress much about the financial part of eating well, but there’s not enough time in the day for me to work, spend quality time with my husband and my friends, and cook all the stuff I want to.

I’m not really a huge fan of doing massive prep or the shortcuts for saving time — I just love the process of making a fresh meal from scratch, so if I don’t have the time to do that I’d rather just eat out.

How did you decide to go vegan?
I was obsessed with animals from the moment that I could talk. From ages 2 to 16, I was sure that I would become an animal trainer or work in a sanctuary. I was completely focused on animals, begging my parents for pets, and hanging pictures on my bedroom wall. When I was around 11, I started feeling weird about eating them and went vegetarian when I was 12. I did it the day before Thanksgiving because I figured if I could make it through, I could be vegetarian.

Once I went vegetarian, I started to explore food in a way that was separate from what my mom served or what was in the house. I found myself wanting to go to the grocery store and try things and figure out what I could eat now that I couldn’t eat hamburgers and McDonalds.

I didn’t consider going vegan; it seemed so extreme. But in my 20s I started to get more involved in animal rights organizations. From then on, I became vegan for ethical reasons. It was really hard — a lot harder than being vegetarian because I love cheese, and pizza, and mac and cheese, and cheddar with Saltines. Those were all of my favorite foods. It was really difficult but it ended up being a blessing; it got me really into cooking and now it’s one of my favorite things in my life. I had to learn how to cook and make versions of the things I loved and missed.

What’s it like to be vegan in Texas?
I can’t stress enough that Austin is sort of a freak version of Texas. There are some Texas-y things about it, but it’s one of the best places in the country to be vegan. Culturally, though, a cool thing to do is to take a weekend trip to a cool BBQ joint in a different part of the state. I can’t really do that — there’s nothing for me to eat!

You say you’re really good at making vegan versions of comfort food favorites. What’s the standout?
I make vegan queso, which is a very Texas thing (well, queso is!). It was the number-one thing I was upset about leaving behind when I went vegan. My version involves roasting potatoes, blending it with cashews, then putting mushroom bacon on top. People really like it so I pretty much always make it for parties. It was adapted from this J. Kenji Lopez-Alt recipe on Serious Eats.

What was the last thing you cooked that really brought you joy?
I’ve been into trying to “elevate” my reheated leftovers lately. Recently, I took a bunch of Spanish rice and queso that was leftover from taco night and put it in a casserole dish with more vegan queso, a jar of salsa, and a package of Beyond Meat beefy crumbles. It was basically like some kind of vegan Tex-Mex Hamburger Helper situation and I loved it so much.

Do you cook vegan food for your friends?
I play Dungeons & Dragons and have a group of like six people who come over every two weeks. We usually do a brunch thing, so I’ll make tofu scramble, pancakes, this locally made vegan chicken stuff (I’ll deep fry that and serve it with waffles). Breakfast has always been my favorite meal. I also make the best vegan biscuits. The secret is this particular type of flour: White Lily Self Rising Flour. It makes them so soft and fluffy.

It sounds like you have such a vibrant community in Austin.
I grew up here and worked at this bookstore in my 20s where I made a lot of really close friends. So there are a lot of people who are still here from that time in my life. A lot of us love cooking. We have a bunch of different traditions. We have a salsa party every year where everyone makes something and brings them in 12 small jars and everyone can take something home. We also have a Tucci’s and Blue Cheese party (inspired by Stanley Tucci) and we cook Italian food. Luckily, veggie spaghetti is the first thing I learned how to cook.

What is the online vegan community like today?
It’s so much easier to go vegan nowadays (as opposed to when I started) because there’s an overwhelming amount of content in terms of recipes and techniques. And I use the word “overwhelming” because it can be hard to filter through recipe results with 300 varying levels of quality. I’ve had to learn how to identify bloggers who are also good recipe developers. The vegan community on social media is huge.

Does everyone get along?
On one hand, there’s such a vibrant community, but on the other hand, there are certain vegans who are smug and judgmental and say the wrong thing or don’t understand intersectionality or class. It’s embarrassing. So it’s odd be on the internet with all of these people that you’re associated with but don’t always agree with on everything.

Do you feel particularly passionate about an aspect of living vegan?
I choose to celebrate body diversity in veganism. It’s not just about food; I don’t wear leather or use animal-tested products. Health people don’t care about that stuff, so that’s a lot of body shaming and fitspiration and encouragement of unhealthy diets that make people look down upon being vegan. I really try to stay out of it, though.

I usually make 3x times more vegan queso than I need whenever I’m entertaining and then save it in Mason jars to eat with chips whenever I’m hungry.

How important to you was finding a partner who also doesn’t eat meat?
Before Peter and I started dating, I dated someone for a long time who ate meat. If I’m being totally honest, I think I convinced myself that it didn’t bother me, but it really kind of did. I regret that I would cook meat for him sometimes. I don’t think I would do that now! I realized that that was something I was looking for in a partner so it was a huge relief when I started dating Peter, who is a vegetarian. He mostly eats vegan, though, because I cook the most.

Tell us about the food at your wedding!
It was baseball-themed! We had this vegan taco truck cater the wedding. I also put together this giant grazing table with some fancy vegan cheese, crackers, fruit, veggies, hummus, salsa, candy, and chocolate. I tried not to make a big deal out of the fact that it was vegan (it wasn’t on the invitation or anything). I wanted people to have this realization that they were all well-fed and it just happened to be vegan.

Favorite snack?
I usually make 3 times times more vegan queso than I need whenever I’m entertaining and then save it in Mason jars to eat with chips whenever I’m hungry. I also snack on frozen peas, celery sticks dipped directly into crunchy peanut butter, and cucumbers with vegan ranch dressing. I am basically five.

The Way We Eat is a series of profiles and conversations with people like you about how they feed themselves and their families.

We’re actively looking for people to feature in this series. You don’t have to be famous or even a good cook! We’re just interested in seeing how people all over the country feed themselves and their families.If you’d like to share your own story with us, or if you know of someone you think would be great for this series, start with this form and we’ll be in touch.