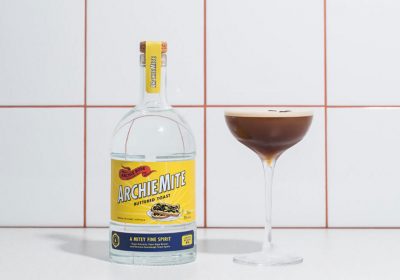 As someone who has never set foot in Australia, the entirety of my knowledge about Vegemite before today came from the Men at Work song “Down Under.” Apparently, it’s something that you can put on a sandwich, and sometimes men from Brussels will give them to you if you speak Australian-accented English at them. But I’ve now learned something new and important about Vegemite: you can turn it into booze.

That development comes courtesy of the ingenious Aussies at Archie Rose, a gin distillery that’s managed to somehow create a Vegemite liqueur. Fittingly called ArchieMite, it’s exactly what its name implies: the distillation of a variety of unnamed yeast spreads with the flavor profile of buttery, yeasty toast. To make it, Archie Rose added more than 55 pounds of butter and 30 pounds of sourdough to the mix in order to really drive home the “buttered toast” flavor mentioned on ArchieMite’s label.

From the sound of it, everything comes through in the taste. “This unaged spirit has a big, mitey character at the front followed by biscuity, bready notes,” a description on the Archie Rose website reads. “On the palate you’re given a combination of all three elements coming together – buttery, almost warm, crisp-edged toast with that umami-rich, savoury mite flavour.”

Putting yeast extract on toast isn’t for everyone (isn’t that kind of just like putting more bread on your bread?), and Archie Rose doesn’t expect to win any new converts to the pro-Vegemite side. But master distiller Dave Withers thinks his team did a faithful job of presenting Australia’s signature spread in a new, boozy package.

“It sits in this weird but interesting place,” Withers said in a statement referenced by Mashable. “Trying to describe how it tastes is like trying to describe the colour blue. If you like that savoury flavour of yeast-extract spreads, you’ll really enjoy it.”

This seems to mark the first “official” time that Vegemite (or some approximation thereof) has made its way into booze, which seems surprising given that yeast extract is a natural brewing by-product. A while back, the Australian government expressed concern that some of its citizens were using Vegemite to make moonshine, calling it a “precursor to misery.”

Time will tell what Australia’s government has to say about this more legitimate take on Vegemite-flavored alcohol, but Aussies can get their hands on one of the 3,000 bottles being produced during this limited-edition run starting on May 8th. Meanwhile, I’ll be sitting here worrying that an American distillery is going to learn about Archiemite and develop an avocado toast liqueur.