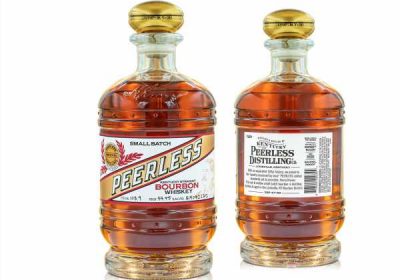 Whiskey is a spirit that takes time to make. Unlike vodka or gin, whiskey needs to be aged in a barrel for at least three years to legally be called whiskey. But most whiskeys don't take 102 years for another batch to become available to the public, which is why, when Kentucky's Peerless Distilling Company announced the release of their first bourbon in more than a century, spirits enthusiasts took note.

Peerless released the first batch of its bourbon on June 22 and sold out of all its bottles on the very same day. They're gearing up to release another 500 bottles, and odds are that they'll go fast, too. It's not just because of the whiskey's pedigree, but that doesn't hurt. In an era when most brands would take some shortcuts to get a whiskey on the market faster—by, say, sourcing a distilled spirit from a different company, or bottling whiskey produced by another distiller under a different label—Peerless revived their brand the hard way.

Peerless began as the the Worsham Distilling Company, putting their first bourbon into barrels in 1889. The company ceased production in 1917—though their whiskey was still available by prescription during Prohibition. Peerless today is run by Corky Kraver, the great-grandson of Henry Kraver, who originally ran Worsham. When Corky Kraver and his son Carson decided to revive their family's bourbon brand, they did so from scratch, building a distillery complete with a 26-foot-tall copper still. The first bourbon from Peerless went into barrels in March 2015, and they waited four years to bring it to market.

"When the time came to make big-picture decisions for Peerless, the notion of sourcing came up, but was quickly shot down," explained head distiller Caleb Kilburn. "The primary reasons were that, first, we knew that we could produce a better spirit than we could purchase and, second, that we wanted to have the pride of crafting our own products from grain to bottle."

The whiskey- process that Kilburn and his team elected to do for Peerless includes putting the spirit into the barrel at a lower proof and then bottling it straight from the barrel. In other whiskey houses, after aging in the barrel, the spirit needs to be diluted to avoid being way overproof. Peerless also uses sweet mash in their whiskey rather than sour mash, an old-fashioned technique that Kilburn revived for the flavor potention.

"Sour mashing is similar to sourdough bread. It produces a soured character in the mash, but it is far less appealing in a distillate than it is in a slice of french toast. To combat this, one would have to distill a sour mash at a higher proof to distill out some of this character. Unfortunately some amazing notes are also removed as collateral damage," Kilburn said.

"I sought to capitalize on the florals, fruits, grains, and mouthfeel that are sometimes caught in this crossfire, so I found a way to avoid the production of the soured note altogether: sweet mashing. Sweet mashing is when one starts with all fresh ingredients and a first generation yeast, which produces a sweet, floral, sour-free beer. This requires much more attention to sanitation and is a far less forgiving process, but at the end of the day, I feel that it makes a better spirit."

As the whiskey matures further, Kilburn intends to keep working with older whiskey methods to push the envelope when it comes to Peerless' bottles. Right now, the spirit is only available in Kentucky, but that's likely to change in the near future.