Home » Everyday Meals » This Is How You Really Pronounce Le Creuset

This Is How You Really Pronounce Le Creuset 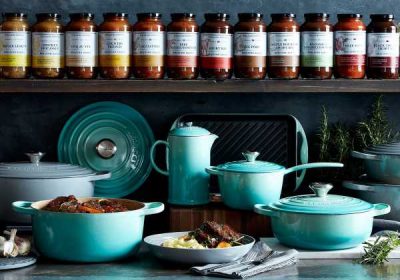 Home cooks and professional chefs have a couple things in common: They both derive so much joy from cooking for others, and they both appreciate the help of a reliable appliance in their kitchens. That might explain the popularity of Le Creuset, the French kitchenware line that includes its iconic Dutch ovens—both amateur home cooks and their counterparts in restaurant kitchens lust after these versatile, beautifully designed appliances. Vivian Howard, the southern chef best known for her PBS documentary A Chef’s Life, has been cooking with Le Creuset tools throughout her career, but as it turns out, she hasn’t always known how to say Le Creuset.

In a video for Le Creuset Howard confesses that, “for the longest time I had such a crush,” on the cookware line, but that she couldn’t “verbalize it because I didn’t know how to say it.” She was afraid that if she mispronounced the fancy French name wrong, she would sound like a “big old redneck.”

Howard need not feel guilty about this lapse in her knowledge. French words are hard to pronounce sometimes, and there’s no denying it would be embarrassing, as a professional chef, to fumble the name—but she’ll find no judgment here. I know I’m mostly winging it every time I say Le Creuset out loud, too, and I’m sure I'm not the only one.

Luckily, Howard is here to help us learn. In the video, Howard finally learns exactly how to say the name with the proper French pronunciation, so if you’ve ever been embarrassed to say the name, pay close attention. She even repeats it a couple times so that you can a good handle on how to say it.

Knowing how to pronounce Le Creuset isn’t necessary if you want to become an accomplished cook, though. As Howard points out, “I know how to use them, I don’t necessarily have to call it by name.” Take it from Howard: Learn how to use the Le Creuset first, then worry about the pronunciation.