This Is The Coconut-tiest Coconut Cake You Can Make 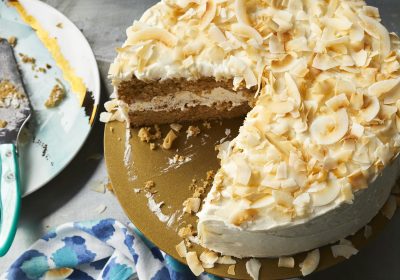 There’s a scene in Parks and Recreation when noted meat enthusiast Ron Swanson instructs a waiter to “Give me all the eggs and bacon you have.” He then stops him, brings him back, and clarifies: “Wait, wait. I worry what you heard is ‘Give me a lot of bacon and eggs.’ What I said was, ‘Give me all the bacon and eggs you have.'” That is sort of how I feel about coconut cake. I do not want a whisper of coconut threaded delicately through the batter. I do not want a little pile of sweetened coconut on top. What I want is, when I take a bite of it, for coconut to jump out at me as aggressively as the Kool-Aid man bursting through the wall. I want it to be like being pelted by many decadent coconuts. I want it to be coconut cake, you know what I’m saying?

It’s also not the kind of cake that you’re going to whip together on a weeknight. The many components here combine to make things extremely delicious, but they take some time to put together, so know going in that you’re going to want to take a while to do this. It’s a special occasion kind of coconut, you know?

Only have unsweetened shredded coconut? Don’t fear. Just soak it in a little simple syrup until the cocnut has absorbed the sweet liquid.

Get the recipe: Ultimate Coconut Cake.