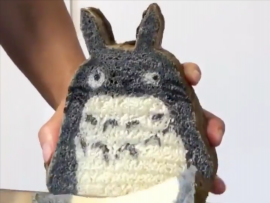 They say we eat with our eyes first. Perhaps nowhere on earth is that sentiment more true than in Japan. From food that doubles as works of art to oddities like clear beer and Pikachu doughnuts, there’s no shortage of mystifying and mesmerizing creations to gander at.

Thankfully, this latest discovery falls firmly in the “art” camp. That’s because a Japanese Twitter user who goes by the name “Izuyo” has been posting some insanely intricate art that uses carbohydrates as its canvas. Izuyo apparently only uses natural ingredients to fashion some fresh-baked facsimiles of anime and cartoon characters.

Take this recent recreation of the titular character from My Neighbor Tortoro. Both its interior and exterior are a fairly faithful recreation that must have taken this star baker some time to figure out how to pull off.

I won’t claim to know enough (OK, any) Japanese to understand what these tweets might reveal about his process, but there’s no denying that fashioning a poké ball with a dang pokémon inside it using only bread is probably the most impressive thing you’ll see on the internet today.

Izuyo’s vast body of work is amazing to say the least. It’s hard to tell what any of this stuff tastes like, but to eat any of his gluten-laden, gallery-worth pieces would just feel plain wrong.

Is the start of a big baking trend? The impetus for The Great Japanese Bake Off? Who’s to say. But I’ll be damned if these aren’t the wildest and most wonderful breads that these eyes have ever seen.