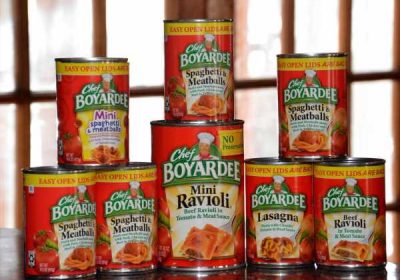 As you might’ve noticed recently, there’s been something of a nationwide discussion about how the United States should reckon with its racist past. While some companies have used this moment to replace their racist mascots, cities across the south have debated whether or not they should tear down statues of prominent confederates, slave owners, and other controversial figures like Christopher Columbus.

While there’s no reasonable argument for keeping up the statues of generals who betrayed their country to fight on behalf of slavery, Columbus presents a seemingly more complicated case for Italian-Americans who (rightly or wrongly) see him as a source of civic pride. If we can’t celebrate him, they argue, who should he be replaced with?

Well, if one Change.org petition currently racking up signatures gets its way, Ohio could soon have a statue of … Chef Boyardee. Aimed at Cleveland’s City Council, the petition pleads the case that a Columbus statue in Little Italy should be replaced by one of Ettore (Hector) Boiardi, an actual Italian-American hero who somehow managed to build a pasta empire without killing or enslaving even a single indigenous person.

WATCH: How to Make Air-Fried Ravioli

It may sound like a joke, but Boiardi’s real-life biography represents the epitome of the American dream. After coming to the US at age 16, Boiardi eventually settled in Cleveland, where he opened the restaurant Il Giardino d’Italia. His food was such a hit that customers asked him to bottle and sell his own sauce. Over time, the Boiardi brothers built up the canned food business we all know today, using their factory to create rations for soldiers during World War II. Those efforts earned him a Gold Star from the US government. Italy officially titled him “king of the spaghetti dinner,” which I hope he put on his business card. I mean how can you not build a statue for this guy?

Because Ohio is, well, Ohio, this isn’t the only viral push for the state to rethink its connection to Columbus and his questionable (to put it quite mildly) reputation. More than 118,000 concerned citizens have signed off on a petition to change the name of Ohio’s state capital from Columbus to Flavortown. Given that Guy Fieri, the Mayor of Flavortown, has managed to raise millions for restaurant workers and tour America’s greatest Diners, Drive-Ins, and Dives without accidentally starting the Transatlantic slave trade, they’ve got a strong case.

So if at some point in the future you find yourself near Tony Brush Park in Cleveland, Ohio and think “hmm, that statue sure looks a lot like Chef Boyardee,” that may be exactly what you’re looking at. If that sounds like a dream come true to you, you can join with the 2,600-plus who have already signed the petition here.