Home » Everyday Meals » This Restaurant Has a Cheese Conveyor Belt

This Restaurant Has a Cheese Conveyor Belt 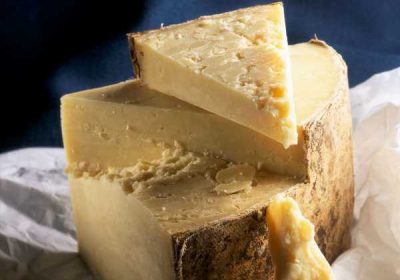 If you brushed your hand against a table lamp and a genie magically appeared in your living room, what would you wish for? After that genie politely told me that he can't bring David Bowie back, and after he questioned whether I really want a tail, I'd probably just ask for an endless supply of cheese, which is honestly just like getting an endless supply of wishes.

But until residential genies are a thing, a newly opened restaurant in London is as close as I'm gonna get. Pick & Cheese calls itself the world's first cheese conveyor belt restaurant, and that is one glorious combination of words. It's also a magical place where guests are seated around a 40-meter conveyor belt that slowly presents an assortment of more than 25 different cheeses, all produced by traditional British cheesemakers. Each well-curated cheese is paired with a complementary condiment, which can be anything from sticky pear jam to honeyed garlic to a traditional northern Eccles cake.

Wow what a first day! Thanks to everyone who came down yesterday and visited the conveyor belt of (Cheese) dreams. We’re back on it from midday today with more of those little dishes of joy. Sunday = Cheese, right? See ya at the belt! ? #PICKANDCHEESE

Cheese novices can choose a pre-selected cheese flight, while connoisseurs and more adventurous eaters can help themselves to a stoneware plate or two (or six, or 10) from the conveyor belt. Each plate is color-coded according to its price, which ranges from a £2.95 ($3.64) cream plate to a £6.10 ($7.54) yellow plate. (There's also an Off-Belt menu that includes the owner's signature Four Cheese Grilled Cheese Sandwich and pan-fried 'Angloumi,' their all-English take on Cypriot halloumi.)

Pick & Cheese is the latest venture from Mathew Carver, who launched The Cheese Truck — and those gooey, melty sandwiches — five years ago. "For three months I worked at a bakery learning about bread and baking, reading everything I could about British cheese and consuming unhealthy amounts of it," he told Metro in 2014. "When we finally traded our first Sunday at Maltby Street Market, we only sold 20 sandwiches to family and friends." But the word about those sandwiches got out fast, and The Cheese Truck eventually made well-received appearances everywhere from the eternally soggy fields of Glastonbury to decidedly drier locations in Istanbul and Dubai.

Two years later, he opened his first brick-and-mortar restaurant, The Cheese Bar, in London's Camden Stables Market. It was there that he started dreaming about the conveyor belt that would soon serve as the centerpiece at Pick & Cheese. "In our Camden restaurant, our customers always want to pick different cheeses from our house list, and create their own bespoke cheeseboard,” he explained to Lonely Planet. “We wanted to come up with a way to offer this, whilst showcasing the cheeses at their very best.” (He also admitted that the cheese-conveyor was a good way to nudge customers out of their flavor-related "comfort zones.")

Pick & Cheese is open every day from 12 p.m. until 9 p.m. inside London's shiny new independent food hall, Seven Dials Market. Walk-ins can snag bar seats for an hour, but groups of five or more are encouraged to make a reservation. And if you happen to bump into a genie on the way in, you can tell him nah, you're good.