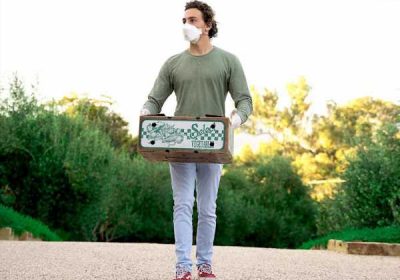 “We are Generation Z and we are here to help.” That’s the first thing you’ll read when you visit the website for Zoomers to Boomers, a month-old nonprofit grocery delivery service started by 17-year-old Danny Goldberg in Santa Barbara, Calif. The goal? Safely (and freely) deliver fresh groceries to as many elderly, immunocompromised, and at-risk community members as possible during this long quarantine.

It didn’t take long for Danny, the founder and president of Zoomers to Boomers, to make moves. After his high school sent students home to help slow the curve—and a week or so before starting online classes—Danny only spent about two days lounging around before the urge to help others kicked in.

“The morning of my third day after school and all my extracurriculars were shut down…and I didn’t really leave my house, I was thinking, there are so many people who are at such a higher risk than I am for [contracting COVID-19]. What can I be doing to help?” he says.

While at home, Danny also watched his dad, an emergency room doctor in Santa Barbara, leave for the hospital every morning, despite the rest of the community’s orders to stay in place. “A lot of the information came from my dad,” he says. “Seeing him get up and do everything in his power to help people who were starting to get sick inspired me to think deeply about what I could do to help.”

Struck by the absence of any existing programs to get sustenance to the most seriously quarantined community members (those over 65 years old or with compromised immune systems), Danny thought, there’s no need for any of them to shop in person and gamble their health when he, a low-risk, healthy, and readily available teen, could happily (and safely) do it for them.

“The morning of March 18, I had the idea,” he says. “Not the name or the website or anything—just [the resolution that] there are elderly and immunocompromised people who can’t get food, and here’s what I’m going to do: I’m going to run a grocery delivery service.”

Danny locked himself in his room for three hours, built a website from scratch, and of course, settled on the perfect name. (Something decidedly upbeat and without any allusion to coronavirus, quarantine, or other pandemic-related buzzwords.) And poof, Zoomers to Boomers was live, its name a playful encapsulation of the mission: Gen Z volunteers helping Baby Boomers (and beyond) stay safe and fed.

That same night, Danny used the Nextdoor app, a digital hub for sharing local information and announcements, to advertise his website and services. “That next morning of March 19, I started making deliveries,” he says, recalling that there were somewhere around three or four initial orders.

That first day, he did all the shopping and driving, but then started calling friends, explaining the concept, and recruiting drivers. “A lot of them are involved in the community and they’re good friends of mine, so they like to help,” he says. “They came in and started making deliveries, too.”

If Danny’s Next Door posting was the spark, a local newspaper story covering ZTB’s services ignited a fire. Danny says that after the story ran, delivery requests jumped from around 20 a day to maybe 60 a day. During that time, if he wasn’t shopping or driving, he was on the phone calling everyone he knew to ask for volunteers.

“Once I got this massive surge of orders, I started building my board of directors,” Danny says. He now has five VPs at his side—all friends from school and sports—to oversee operations, finance, technology, safety, and volunteer services.

ZTB has also linked up with local grocers, starting with Santa Barbara purveyors Gladden & Sons, who approached Danny and offered to shop and box up every order for them. So all he and his helpers have to worry about are pickup and drop-off. After this and a few more grocery store partnerships, Danny says, “it became a lot less of a fight to get orders filled and more of a smooth system.” That meant more folks could get more food—and faster.

What started as one teen shopping and toting a few grocery orders around the neighborhood snowballed quickly (just a few weeks’ time) into a full-fledged delivery service that’s already spawned Zoomers to Boomers chapters in 12 U.S. cities—and now Hyderabad, India—with more chapters in the works.

(To join an existing team, find your locale here; to start a ZTB chapter where you live, email [email protected], or reach out via  Facebook or Instagram direct message.)

“It’s been a pretty fantastic response,” Danny says. “We try to stay as far apart as we can while making deliveries to be safe, but these people have been alone in their houses for the past month or more. When they see young people coming and knocking on their doors to bring them groceries, it’s always an amazing response. The biggest smiles you’ll ever see—I’ve had a couple people crying.”

This experience has given the elderly and homebound the gift of food and safety, but it’s also created an unexpected community and deeply impacted Danny and his friends (just as you might expect launching and operating a humanitarian effort from the ground up—amid one of the scariest health crises in recent history—would).

“It’s definitely helped me and my friends grow as people and grow together as a community. But it’s also brought a lot more responsibility into my life,” he says. “Prior to this, I volunteered [as a physics and math tutor], tried to help out as much as I could—but now, running something at this scale has helped me learn a lot about what I’m capable of.”

He also highly encourages anyone and everyone—especially those who are home feeling useless or helpless in these uncertain times—to reach out to people who are at risk, anxious, or far from loved ones. “Even if you can’t help with physical things like grocery deliveries, just being there in your community for people who need it most is going to be so important for the rest of this pandemic.”

You don’t need the website-building skills or the time to drive groceries around town to be the kindness that your community, friends, and family need.