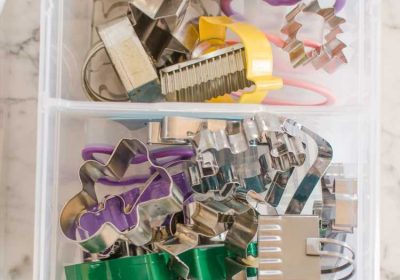 Usually when a cookie-related video goes viral, it’s some triple-layered, quadruple-frosted confection that no one could possibly fathom how to eat. But this viral cookie-related video is a little different: It’s a video that takes viewers behind the scenes of how cookie cutters are made. You’re dying to know how, right?

You know, those old-school, barebones, flimsy metal cookie cutters that come in all kinds of different shapes and sizes? It turns out you can get sucked into watching a 23-second video of how they get made on loop for hours. The video, originally posted by an account called Tool of the Day and recently surfaced by this tweet, has about 11 million views as it follows the journey of a thin metal band as it transforms into a pineapple, tree, gingerbread man, or reindeer.

The video opens with a shot of a pineapple cutter in the middle of the mesmerizing process. A large metal ring is loosely fitted around a mold of a pineapple which is then assaulted by a series of motorized arms that punch the metal band against the mold at just the right angles to achieve pineapple perfection. Impressively, in this and each of the molds, the band winds up fitting perfectly against the mold, without any extra metal scraps. Then all the arms release in unison, releasing the cookie cutter. It is so satisfying to watch.

The best part of the video by far is the creation of the reindeer cutter. It’s the most complicated of the shapes, requiring thatthe arms slip into more complicated nooks and crannies around the head and antlers. It shows both just how simple and yet how complicated making something we use all the time can be. And now we will never look at a cookie cutter the same way again. If you need us, we’ll be here, watching this video forever.