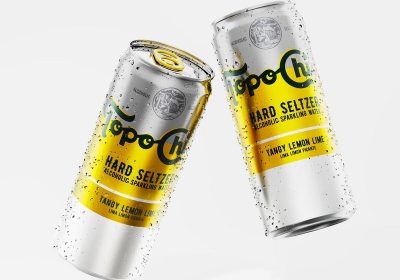 The hard seltzer craze, it's safe to say, is in full swing. And with it has come a slew of newly-minted household brand names like White Claw, Truly, and Bon & Viv. As the popularity of these seltzers has spiked (pun intended), well-known brands in other beverage categories have launched their own lines to cash on both the trend and their recognizable trademarks, including Bud Light, Corona, Pabst Blue Ribbon, Four Loko, and Smirnoff. Now another familiar favorite is joining those ranks, but jumping into the mix from the non-alcoholic end of the sparkling water spectrum: Topo Chico.

The Coca-Cola Company, which owns Topo Chico, made the short-but-sweet announcement today along with a tease of the "experimental" beverage's packaging in those all-too-familiar-to-hard-seltzer-drinkers skinny aluminum cans. The product will apparently debut in a Tangy Lemon Lime flavor.

The Mexican sparkling mineral water brand was founded 125 years ago, sourcing its product from around the city of Monterrey, and has somewhat of a cult following. Relatively close proximity and cultural crossover into south Texas introduced the beverage to a U.S. market, where it has grown ever since, reaching all 50 states—though even when the beverage was available in over two-thirds of this country, Texas still accounted for 70 percent of total domestic sales.

As the (non-boozy) seltzer boom/sugary soda backlash happened in the past decade, Topo Chico has further taken off in the United States, landing it on lists like Food & Wine's best sparkling waters and the World Water Championships winner for stellar whiskey mixer. The brand was purchased by The Coca-Cola Company in 2017, and the launch of the hard seltzer version will be the parent company's first and only alcoholic offering in the U.S. since the 1980s.

Further release details are yet to be pinned down, but Coca-Cola says Topo Chico Hard Seltzer will launch in select cities throughout Latin America this year and, according to a representative, will hit the United States sometime in 2021.

Check out some of our favorite hard seltzer brands to sip in the meantime here.