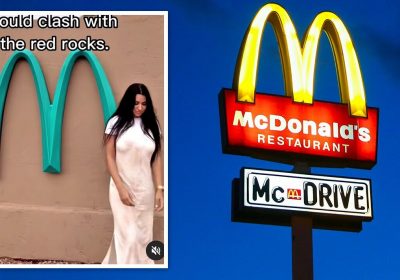 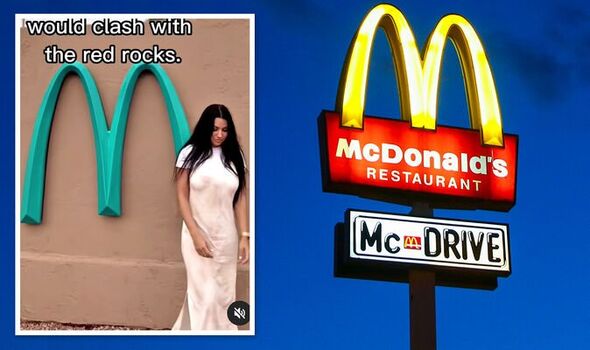 The travel blogger family behind the Youtube channel, TikTok and Instagram pages @Hot.Travel.Show shared a special story behind one of the world’s most unique McDonald’s branches. Mum-of-two Val and her family shared a video of their visit on Instagram with their audience of over 4,000 followers, explaining the story behind why the restaurant in Sedona, Arizona, chose not to have the traditional golden arches.

In the video, Val can be seen walking in front of the McDonald’s which is made from earth-tone concrete to match the surrounding red rocky landscape.

What makes this branch so special, though, is that instead of the usual golden ‘M’ logo, the restaurant has opted for bright turquoise arches instead.

The outdoor dining space continues the theme with turquoise umbrellas over the tables.

The travel vloggers explained: “Only one McDonald’s in the world has turquoise arches. It was believed the yellow colour would clash with the red rocks.

“The government officials of Sedona, Arizona did not want golden arches Because they were afraid that the colour yellow was going to clash with the red rocks.”

Due to the one-of-a-kind landscape in this part of Arizona, there are rules in place for buildings to make sure that no structure intrudes too much on the surrounding natural scenery.

When this branch of McDonald’s was built in 1993, city officials felt the typical bright yellow ‘M’ would interrupt the aesthetic of the region.

They claimed the traditional gold would clash with the red rocks which surrounded the restaurant and instead chose the turquoise tone.

Experts from Atlas Obscure explained: “The teal arches, along with teal welcome signs, still stand there today. They’re the only teal McDonald’s arches in the world.”

However, this is not the only McDonald’s restaurant in the world which has strayed away from the usual golden arches.

The McDonald’s on Avenue des Champs-Élysées is one of only two restaurants with white arches. The design was chosen to blend in with the surrounding architecture of “the world’s most beautiful avenue”.

This McDonald’s, located on Sunset Boulevard, opted for red arches rather than golden, though it’s not completely clear why the decision was made.

When McDonald’s first opened its doors in 1940, the brand had just one arch as its logo rather than two. Though most restaurants now return two arches, in Winter Haven, Florida, one branch has held on to the very first sign.

This stunning McDonald’s is housed in an 18th-century mansion, which even features a grand staircase and a glassed-in veranda.

In keeping with the aesthetics of the building, the font is black and there are no golden arches to be seen.

Another unique Californian McDonald’s is located in Monterey, where one location opted for black arches rather than the typical yellow hues.

The overall aesthetic of the restaurant is modern and chic, to fit in with the surroundings.

In a special twist, a McDonald’s in Norway opted to make its Golden Arches from real gold.

The restaurant is housed in a former bank with marble columns lining the entrance.