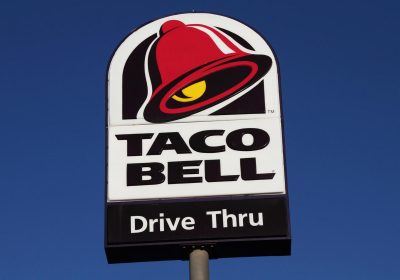 As far as I’m concerned, Taco Bell is already a wonderful establishment (well, except at breakfast time). Its handful of hip “Cantina” locations, where you can pair a beer or boozy Baja Blast slushie with your chalupa of choice, are even better.

But if you thought that getting a Mountain Dew-based cocktail in Midtown Manhattan for under $7 was too good to be true, that’s because it is (kind of). According to some sleuthing done by Vinepair, it seems the alcohol options for your frozen margarita at New York’s upscale versions of T Bell aren’t what they at first glance appear to be. Instead of traditional liquors you’d expect, the booze options are instead lower-proof alternatives like fermented vodka, fermented rum, and agave wine.

At this point, you’re probably asking yourself just what the hell fermented rum even is. Great question! Just like their real-deal counterparts, the ersatz liquor you’ll find in an NYC Taco Bell cantina is fermented. But these weaker knockoffs aren’t distilled, that crucial step that gives certain potables their alcoholic potency. Without distillation, you can’t legally call vodka vodka, rum rum, etc.

While Taco Bell hasn’t said anything about what’s going on, it’s possible to infer their motivations from some copy on the website of the San Gabriel Beverage Group, the company who provides Taco Bell Cantinas with its “spirits”. Their Petrov Reserve “enables establishments with Beer & Wine Licenses to offer… any vodka-based cocktail.” Given that it isn’t always the easiest process to nab a full liquor license, it maybe just makes more sense for Taco Bell to serve up 20% ABV knockoffs (including the admittedly somewhat legit 100% agave wine) rather than go for the real thing. Or maybe they just want to keep customers from getting too rowdy, who knows.

Of course, it’s important to point out that this seems to be a phenomenon unique to New York City for whatever reason. At other Taco Bell Cantinas in places like Alexandria, Virginia, you can spike your Baja Blast with your choice of Tito’s Vodka, Bacardi Rum or Jose Cuervo Tequila. So if you’re outside of the five boroughs, you can rest assured that you aren’t being deprived of that sweet, sweet alcohol.

It sucks to be cheated out of a stronger Baja Blast Buzz, but at the end of the day, some perspective is important: you’re still drinking inside a Taco Bell. And that, my friends, is worth celebrating.