Want Healthier Fast Food? Make It as Bland as Possible 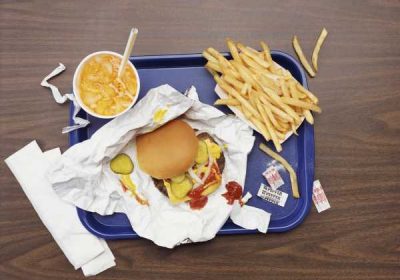 Fast food in modern times feels like a culinary arms race. While that creates some delightfully decadent overloaded burgers adorned with all manner of cheeses, sauces, and bacon, the results aren’t exactly low in calories, or particularly high in nutrients most of the time.

Well, a deep-dive analysis published by Harvard’s T.H. Chan School of Public Health suggests there is a way to cut back on the massive calories found in your average fast food combo— as long as you strip away almost everything we like about them in the first place.

For the study recently published in the Journal of Preventive Medicine, lead author Kelsey A. Vercammen and her team pored over nutritional data from 34 fast food and fast casual restaurants, looking at the “default,” minimum, and maximum combo options (entrée, side, and drink) to assess their calories, saturated fat, and sugar content. The average calorie count for default combo meals was 1,193, accompanied by 14 grams of saturated fat and 68  grams of sugar. That’s uh, quite a bit more than the Healthier Restaurant Meal Guidelines baseline of 700 calories.

If those numbers made you choke on your Baconator, fear not! It turns out that some modifications to your order can rein things in. For starters, Vercammen told Reuters that swapping out soda for water is the easiest way to cut out calories and most of the sugar. From there, things get a little more painful: you’ll have to “remove toppings and dipping sauces from entrées” and presumably sides.

If there’s one flaw with the study (from what this uneducated writer can see), it’s the fact that the lower-calorie options aren’t described in terms of content or sales data. It’s entirely possible that what registers as a “healthy” combo is little more than a beef patty between two buns and dry, unsalted fries.

It just goes to show that while you certainly can eat healthier by changing how you approach your fast food order, you might want to just go somewhere else that you can order a salad instead.