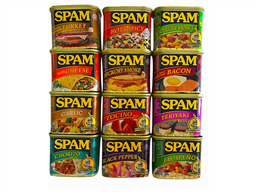 If you’re anything like us, your heart was a little broken on Sept. 24.

That’s the day both Walmart and the official Spam website debuted a new novelty flavor for the classic canned meat: pumpkin spice. It’s also when both websites, which were selling the product exclusively, sold out in a matter of a few hours.

It’s unclear if Hormel is going to do a second run of their newest flavor. If they do, we’ll try to snag a can. But if you also missed out on the pumpkin spice Spam boat, there’s no need to mourn too deeply. Amazon has provided an alternative, though less pumpkin spiced, option for those who are deeply craving alternative flavors of spam.

For just $63, you get not one, not two, but 12 flavors of spam. Everything from teriyaki to Portuguese sausage is represented in this bundle, providing the average family with enough spam to feed a small army. And the possibilities for these cans are highly varied; Hormel even helpfully provides recipe suggestions on each can for those who aren’t familiar with how tocino-flavored Spam is served in the Philippines, for example, or who need ideas for how to use the cheese-flavored variety.

For the sake of science, we tried all 12 options, prepared in the same, classic Spam-cooking method: fried in a pan until golden brown. Here’s our ranking of that sampler pack, from most flavorful to just OK. While this list is loosely categorized from our most to least favorite options, keep in mind that Spam preferences can vary widely, depending on how it’s prepared and which variety is most favored in a given culture. Ultimately, there’s no going wrong with this multi-pack, and while we had clear favorites, we encountered no flavors that we truly didn’t like.

We’re already Spam fans, so wanting to grab slices of it straight out of the pan isn’t unusual. But the Chorizo variation smells seriously delicious when it’s cooking up, and tastes great once it’s done frying. It also has a slightly more sausage-like texture than garden variety spam, and the spices lend an attractive red tint to the meat. We definitely wouldn’t turn this down as a new breakfast staple.

Tocino is a pork-belly product common in the Philippines that’s been cured in a sweet marinade and is frequently served for breakfast. Spam’s take on the dish definitely captures that sweet, bacon-y flavor, so much so that it makes us want to run out and buy the real thing for a direct comparison. Definitely not a bad addition to your pantry if you’re a fan of sweet breakfast meats.

This Spam variety has a classic soy sauce flavor that would go great in musubi, or in any other Hawaiian-inspired dish that blends Japanese cuisine with Spam. It would also taste work well as the stuffing in onigiri, if you’re craving another option for bento-friendly lunches.

Portuguese sausage is a garlicky, paprika-filled meat that’s usually smoked for added flavor. We didn’t pick up much garlic, but the smoked sausage flavor definitely comes through, as does the paprika. This Spam variety didn’t have quite the same sausage-like texture that the Chorizo did, but it is still worth a try if you prefer the heavily spiced versions of Spam.

WATCH: How to Make Hawaiian Burgers with Spam and Pineapple Slaw

If you’re used to fire-alarm level heat, don’t expect it from this Spam can. Hot & spicy is, at best, medium. But it was the most spicy out of the spicy varieties, and the Buffalo sauce-like flavor was pretty nice. If you like a little tingling on the tongue, but are generally not a fan of spicy foods, this is the flavor for you.

These three options are good substitutions for the basic bacon flavors, and wouldn’t go amiss in breakfast sandwiches, burritos, or wherever else you normally add pork-filled products. The “real Hormel bacon” variety tastes pretty much like Spam with added bacon flavor, where hickory smoke and black pepper both taste like Spam varieties of those common bacon flavors. If we had to pick a favorite, we’d go with hickory smoke, but all of these are fairly interchangeable.

Not Our Favorites, but Still Spam

The ghosts of the flavors depicted on the labels are haunting these cans. You’ll get a hint of pickled jalapeno in the first variety, a bare whiff of garlic in the second, and there’s no denying that the third tastes like turkey. But honestly, all three of these still taste too close to the original Spam to be worth the trouble. Still, Spam is Spam, so these won’t be total disappointments once they’re cooked up.

Meats with cheese built in have never been pleasing, exactly. The cheese usually tastes fake, and could easily be replaced with an actual slice of cheese melted on top. In this variety, whatever cheese Hormel has included doesn’t taste like anything at all. That’s a boon, we suppose, but one that still leaves you with the question of why it’s worth it to pick the cheese variety over the classic in the first place.