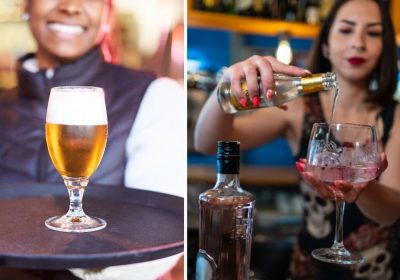 Wetherspoon is a much-loved British establishment – primarily for the cheap drinks. But, often, the staff get it tough. A waitress working for the pub chain has shared one of her least favourite customer orders.

Flora, who goes by the user name @flora.21 on TikTok, shared a video that instantly received thousands of views and hundreds of comments.

Wearing a Wetherspoon staff lanyard, Flora posted a video of herself with the text: “Delivering 20 shots to a table of four and watching one of them gagging into a pint glass.”

She then lip-synced along to Madonna’s Like a Prayer, singing the lyrics “heaven help me” while doing the sign of the cross across her chest.

The video was posted along with the caption: “We think you’ve had enough.”

TikTok user @aaaaaron118 wrote: “I’m sorry but they. They are me. I can only apologise.”

User @bobby_birch added: “Fitting that I identify as them.”

User @summercx said: “That person is me.”

Fellow Wetherspoons workers proceeded to fill the comments with their similar experiences.

User @sophielang02 wrote: “As a fellow Spoons worker, the amount of sick filled pint glasses we get is just gross, also people doing drugs in the toilets.”

User @carrot688438 commented: “I had someone vomit all over the table and they moved to another one without telling us they have been sick.”

One user admitted to this “gross” behaviour that can make working in a pub challenging, saying: “I always vomit into an empty glass. I don’t tell them I’ve been sick coz they’ll kick me out.”

Fellow Wetherspoon worker @lacyslucy shared: “My favourite is when they vomit on both the glass and table.”

To this, Flora replied: “And we’re expected to clean it up.”

Others revealed they were leaving their Wetherspoon jobs because of the treatment they often receive from customers.

User @oliviagould wrote: “Had enough, handed in my notice today.”

User @gershswim added: “My last shift is on Sunday!! I cannot wait to leave Spoons.”

Wetherspoon has come under fire in recent years for how it treats its staff, from low pay to poor working conditions, according to reports.

A staff worker writing under a pseudonym for the Independent in 2019 said: “Like a lot of hospitality jobs, work at Wetherspoons is, in my opinion, underpaid and undervalued.

During the pandemic, chairman Tim Martin faced criticism for playing down the risks of people gathering in pubs, insisting that the Government was wrong to shut them down in March 2020.

Mr Martin displayed anti-lockdown posters in the windows of some of his pubs which, despite being removed following criticism, he did not regret.

He told Sky News in February last year: “I think there’s a strong case which has been made by many, many people that the type of hard lockdown that you have had in the UK doesn’t work.”