Home » Everyday Meals » What Is a Yule Log, Anyway? 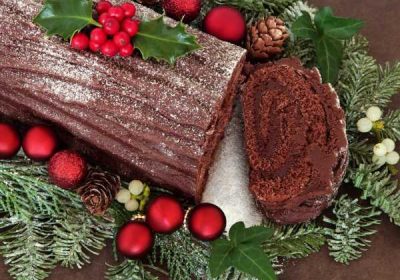 Here’s everything you need to know about the Yule log, one of the Christmas season’s most delicious traditions:

A Yule log cake, also known as a bûche de Noël, is a traditional holiday dessert that is meant to resemble an actual log.

It’s usually made with a genoise—an Italian sponge cake—that has been baked in a Swiss roll or roulade pan, iced, rolled into a cylindrical shape, then iced again.

Though it’s traditionally made with yellow sponge cake and chocolate buttercream icing, it’s common for bakers to put their own personal twists on the dessert. Chocolate cake and flavored icings are popular variations.

The cake is usually decorated to look like an actual log: One or both ends of the cylinder are often exposed to resemble a chopped tree branch, powdered sugar is sprinkled on top as “snow,” and natural bark-like marks are made with a fork on the icing to mimic the texture of wood.

The tradition of burning a log as part of a ritual during the holiday season is deeply rooted in pagan tradition.

Yule or Yuletide is a winter festival historically celebrated by the Germanic peoples of Northern Europe.

The celebration was likely originally inspired by pagan mythology, but was eventually adapted to fit a Christian worldview (Christmastide or Christmastime). Still, some pagan elements, like the yule log, clung to the seasonal tradition.

A Yule log is a special log burnt on a hearth during the Yuletide season. It’s origins are unclear, but it was first recorded in 1184.

The large log was burnt every day during the Twelve Days of Christmas. It was important to save one piece to be burned the following year.

“The ceremonial burning of the Yule log came to symbolize the Christian vision of good versus evil,” Ace Collins writes in Stories Behind the Great Traditions of Christmas. “As the fire grew brighter and burned hotter, and as the log turned into ashes, it symbolized Christ’s final and ultimate triumph over sin.”

The Yule log is called different things in different places: In different parts of England it’s called a Yule clog, Yule block, and stock of the mock. It’s known as the Yeel Carline in Scotland and Bloc na Nollaig in Ireland. You may be familiar with the French term, bûche de Noël.

We don’t know who baked the first Yule log cake, but we do know that the first recorded recipe for sponge cake appeared in 1615 and the Swiss roll cake originated sometime in the 1800s.

The practice of baking a cake to resemble a log was popularized during the 19th-century in Paris (that’s why they’re often called bûche de Noëls).

If you’re a The Great British Baking Show fan, you know that making a roulade (a sweet or savory dish filled with meat or pastry) is tricky business, especially when you’re working with cake.

If your sponge is the wrong texture or if you don’t roll carefully, the cake will crack and will look unappealing.

Here are some tips to remember:

Try your hand at a traditional Yule log this year with one of our favorite bûche de Noël recipes: