Home » Everyday Meals » What Is Liquid Smoke and How Can You Use It?

What Is Liquid Smoke and How Can You Use It? 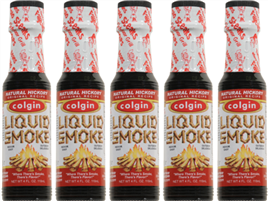 Liquid smoke: If you haven’t used it to flavor your foods, you’ve likely seen it in the grocery store. But what the heck is this mysterious ingredient—and how should you use it?

What Is Liquid Smoke?

The great thing about liquid smoke is that it doesn’t pull any punches: It’s literally smoke that has been condensed into a liquid.

Smoking, the process of flavoring, browning, or cooking food by exposing it to smoke, was once a necessity—people as early as the paleolithic era realized that smoked meat was easier to preserve than meat that was simply dried.

These days, even though we have refrigeration, we still like to smoke certain foods at barbecues or tailgates.

Liquid smoke is added to foods to replicate that smoky, campfire-esque flavor without all the hassle.

Brands you might be familiar with are Wrights, Colgin, and Stubb’s.

Related: The 5 Most Common Home Barbecue Mistakes, According to a Legendary Pit Master

Liquid smoke was likely born at the turn of the 19th-century, when a young Ernest H. Wright noticed "a drop of liquid trickling down the stove-pipe" in the print shop he worked at as a teenager, according to a 1923 edition of The Rotarian. This phenomenon—which was caused by rising smoke hitting cold air—never left his mind.

Years later, Wright (who had become a pharmacist) was experimenting with wood combustion. He sought to replicate the dark drops from his youth by running smoke from burning wood through a condenser. The resulting liquid, he found, could be used to make foods taste like they had been smoked without actually smoking them.

Related: What Is Worcestershire Sauce—and How the Heck Is It Pronounced?

These PAHs, a byproduct of the smoking process, can be carcinogenic.

If you frequently flavor your foods with liquid smoke, don’t worry: The amount PAHs in most brands are quite small.

We don’t recommend drinking it straight from the bottle every day or anything—but the few ounces you’ll use to season your brisket or chili should be pretty harmless.

If you just emptied your last bottle but need to find a smoky substitute ASAP, you have a few options:

How to Use Liquid Smoke

Liquid smoke is pretty potent, so you don’t have to use a ton to get your point across—½ teaspoon to a tablespoon is enough to add depth to your chili, soup, or stew without overpowering your tastebuds.

You can also use it to add an authentic smoky taste to grilled, broiled, or sauteed meat. To pull this off, you just need to brush a thin layer over your food before it’s cooked. If you’re working with ground meat, just mix a few drops in with the rest of your spices.