What It Actually Means to Slice Lengthwise and Crosswise 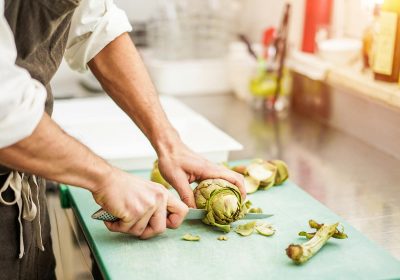 We’ve all been there. You’re working your way through a recipe and see that the instructions say to slice something in half crosswise. And then you’re supposed to cut those halves lengthwise. You can sort of make sense of it in your head at first, but then you start to overthink it to the point where your face looks like that confused math lady meme. You look down and the vegetable on your cutting board is hacked to bits, and you’re pulling up the Seamless app open on your phone. Your confusion is warranted, but I can assure you there’s an easier way that does not involve ending your night with takeout.

While “crosswise” doesn’t really explain much, “lengthwise” is pretty easy to remember. Essentially, it means to slice vertically along the lengthy side on something, which is particularly simple to figure out when it comes to ingredients that have long sides, like carrots or strips of bacon. It can be trickier to find the long side on round foods like onions or cabbage, but you should really think of lengthwise as from pole to pole—from the two nubs on a lemon, from the root to the bud of an onion, from the stem to the base of a tomato. If your piece of produce were a globe, slicing lengthwise is like marking the lines of longitude. You get it, right?

Crosswise is simply slicing in the opposite direction—like the lines of latitude on a globe, or going around the circumference of a sphere. Crosswise cuts are typically called for when you want to make rounds of even thickness, like onion rings or tomato slices for a bagel.

So, you did it wrong? And your oven is preheated and your friends will be over for dinner any minute? Don’t freak out, and definitely don’t throw out your chopped ingredients and start over. Ultimately, slicing is slicing. You’re not being tested, and an onion sliced crosswise tastes exactly the same as one that was sliced lengthwise. The ingredient may act a bit differently when cooked, but for the most part you’ll end up with something edible, if not completely awesome. Just bookmark this article for next time.