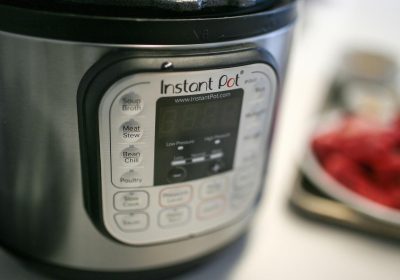 I know I’m not the only one. Almost every day it seems that the Instant Pot, that darling of the internet, is super-duper on sale, and you think, “how can all those millions of evangelists be wrong?” So one day you pull the trigger and order it.

And then it arrives, and you leave it in the box, paralyzed by an irrational fear of it exploding, imagining months of painful burn treatments or being homeless because a kitchen appliance turned your house into a cartoon crater.

WATCH: How to Use an Instant Pot

I was there. I was SO there. My multi-cooker sat unopened in my office, not even in the kitchen, for NINE MONTHS. I debated just giving it to a friend. Then two things happened.

I got sick while my husband was out of town, and one of my dearest friends published a cookbook.

These things were unrelated to each other, but they were both related to the Instant Pot.

While suffering from a cold, which had left me fairly bereft of appetite for anything other than soup and saltines, my husband had to go on a business trip. While he was gone, I mended and found myself with my appetite returned to me suddenly one evening and very little of substance in the larder. I remembered that someone had told me about making pasta really easily in the Instant Pot and figured I would take a deep breath and give it a try. Worst case, there was always takeout.

I got the beast out of the box, gave the relevant parts a quick wash, and, armed with some crowd-sourced recommendations, dumped a jar of pasta sauce, two cups of water, and a half box of penne into the pot, closed it up, and set it for high pressure for seven minutes. I will admit to watching it do its thing from a safe distance. Okay, I side-eyed it from behind the pantry door. It pinged and steamed and hissed and did not explode. I let it naturally release for five minutes, and then put on an oversized oven glove. With my longest wooden spoon, I poked the release valve. When not a wisp of steam remained, I carefully removed the lid, leaning back at the waist like a gymnast. Then I peeked inside.

Get the recipes: Our Best Instant Pot Recipes

One stir of the contents and I had pasta. Not just pasta, but delicious pasta. The pasta had absorbed both water and the flavor of the sauce and was perfectly al dente. A dash of grated parm and I was off to the races. It wasn’t make-do pasta, or good enough pasta, or better than nothing pasta. It was craveworthy pasta. It was the easiest pasta ever and I patted my instant pot like it was a good dog and vowed to try other recipes.

Then the next week, my friend Chandra Ram released The Complete Indian Instant Pot and my life with the appliance was forever sealed. Because I am new to Indian food, and a total neophyte at cooking it, and this book made me feel so insanely COMPETENT. I made butter chicken in 30 minutes, and my husband, who is not new to Indian food, said it was one of the best he ever had. I made rice better than in my rice cooker, and green beans with coconut in three minutes, and steamed chocolate chai puddings that were dessert nirvana.

By the time I had explored the pages fully, I was hooked on both the book and the pot.

I am not, it should be said, one of those “every day, every recipe” Instant Pot people. I use it more often than I use my regular pressure cooker, but probably only three times a month or so. It has transformed the way I make dried beans, has pretty much replaced my rice cooker, and I love finding things that are made simpler and faster without losing flavor. It is great for stock and soups, chilis, and braises. It is wonderful for things like homemade applesauce and apple butter, marinara, and ragu.

I have found that not all recipes work, but this is true of all recipes in general. If you are looking to break the seal on your own multi-cooker, in addition to Chandra’s book, I recommend the two Melissa Clark has published, Dinner in an Instant and Comfort in an Instant both of which have terrific basic recipes for everyday and Sheri Castle’s Instantly Southern, for Southern classics made simple.

Read more: 11 Things You Didn’t Know Your Instant Pot Could Do