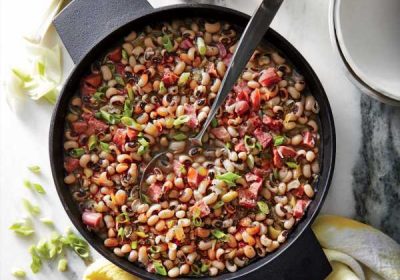 If you grew up in the Southeast, there was likely never a question in your mind as to what was for dinner on New Year’s Day: ham, black-eyed peas, and some sort of greens. Downing these veggies each year is meant to give you a future financial boost: pennies for each pea and dollars for the greens. Regardless of whether your custom calls for collards or turnips, the year simply doesn’t start off right without a heaping serving of at least one of these Southern staples. But why do we choose to kick off New Year’s day with these dishes specifically? How did the Southern New Year’s dinner tradition start?

Interestingly, black-eyed peas have played a part in end-of-year traditions for well over 1,000 years. According to Andrea Lynn of The Spruce Eats, black-eyed peas frequently show up during celebrations for the Jewish New Year, Rosh Hashanah, because they symbolize wealth and prosperity. It’s likely that Sephardic Jewish immigrants, after first arriving in Georgia, brought that tradition with them.

Black-eyed peas as a good luck dish is especially thought to have spread after the Civil War. Some say that the Union Army left behind a ton of ham and black-eyed peas when the war was over because they considered those foods unfit for human consumption; Confederate soldiers, after a long war, were grateful for the scraps. Another theory is that black-eyed peas became a popular Southern food after freed slaves began associating them with emancipation. The legume’s popularity may have simply spread because Southern slaves were already familiar with black-eyed peas; a number of African countries have used them in staple dishes for centuries.

While black-eyed peas and greens are pretty constant as New Year’s meal components, the exact annual tradition can vary from family to family. For example, cornbread can be used to represent gold; tomatoes, when stewed with black-eyed peas, may ensure prosperity. Some customs dictate that to ensure ample luck throughout the entire year, 365 peas have to be downed in a single sitting. And although we don’t necessarily recommend this variation because of the obvious choking hazard, some regions include a penny in the pot with the black-eyed peas. If the penny lands on your plate, you’ll have the most luck during the coming 12 months.

The New Year’s black-eyed peas and greens dinner may have been influenced by a lot of disparate cultural and regional forces over the past few centuries, but it’s now become part of the fabric of the South. So regardless of whether you prefer your annual peas in Hoppin’ John or with a spoonful of mint jelly, be sure to eat up — you never know when you’ll need an extra penny or two during the coming year.