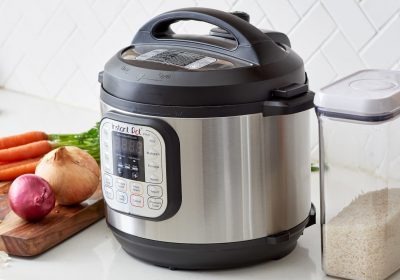 Anyone who has an Instant Pot will rave to you about how it lets you cook anything you want right in the one appliance, without much babysitting. Williams Sonoma, the gourmet cooking shop, has capitalized on this magical phenomenon just in time for the holidays by selling a kit to help you to make almost your entire Thanksgiving dinner right in your Instant Pot.

That’s right, forget the standing and stirring for endless hours, forget the nostalgic aromas of stock stewing through the day and the buttery scents of stuffing baking. This kit, which is on sale on their site and in stores for $39.85, is designed to feed four to six people and comes with ingredients to make a focaccia stuffing, butternut squash soup, and macaroni and cheese, all in your Instant Pot.

We did the math, and theoretically that’s all your Turkey Day sides finished in just 28 minutes! Now, obviously that doesn’t include prep work, coming to pressure time, and release time, but still that likely adds up to a Thanksgiving dinner that will probably be done before the Macy’s Thanksgiving Day parade.

The only crucial step you’ll still need to do on Thanksgiving day with this kit is, ya know, make the turkey… which is pretty important. Oh, and some pumpkin pie which, funny enough, you can also make with a little help from your Instant Pot!