Home » Everyday Meals » Yes, You Can Be a Canner: Here’s How

Yes, You Can Be a Canner: Here’s How 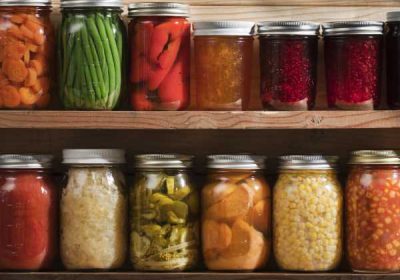 What does your brain conjure when you think canning? Is it doomsday preppers, stocked up with enough food for a crisis and the last laugh, or is it memories of preparing jam or pickles with a loved one? No matter the context, there’s one value that the act of canning champions: self-sufficiency.

To an outsider, the process of home canning may seem terrifying with boiling water, machinery, or simply the chance of your hard work spoiling. However, the reward—saved money, better-tasting food, sustainability, and reserves that won’t spoil without refrigeration—far outweighs the risk.

Like many other culinary innovations, canning’s origin lies in war. During his time as emperor of France, Napoleon Bonaparte put out a call to the nation’s scientists to help preserve food for his armies. After experimenting with sealing techniques and mediums, the process of canning in jars was born. The late 1860s brought the concept of “country canning,” which utilizes reusable canning jars with a rubber seal.

Canning became commercialized after World War II, when food manufacturers were suddenly faced with a surplus. The companies that once fed the troops shifted their focus to home consumers with advertising convincing people that canning at home was dangerous and unsanitary.

“Through the 40s, 50s, and 60s, canning really started to taper off,” Marisa McClellan, author of multiple books on canning including The Food in Jars Kitchen: 140 Ways to Cook, Bake, Plate, and Share Your Pantry. Since then, home canning has resurged in the 1970s and 2000s, especially in response to anxiety caused by recessions, she says.

Amanda Blum, a canner based in Portland, Oregon, says there are two philosophies on canning: “My grandmother did it so it must be fine,” or “I’m really concerned about botulism so I’m only gonna follow these canning recipes.” Most canners fall somewhere in the middle. The processing step will sterilize the jars and the food inside, if done correctly. As long as you follow the best practices, canning at home is perfectly safe, but if you’d like more guidance, check out the resources available from the FDA, Ball, and your local county extension office. Canning is a scientific process, so there are certain laws you must observe—if you don’t pay attention to water temperatures or your food’s pH, for example, whatever you’re canning will likely spoil.

The second commandment of canning is that you don’t need a bunch of fancy new equipment to start, and you certainly don’t need to spend tons of money. Since canning is about sustainability, most canners don’t even purchase new jars. “The last place you want to buy things is at the supermarket, unless they’re having dramatic sales.” Blum says. Instead, try places like Craigslist, yard sales, and Amish supply stores like Lehmans.

“Even a dollar is too much for a jar,” she adds. A jar has three parts: the glass, the ring, and the lid. The jar and the ring are reusable, while lids aren’t. “Jars have a 30- to 40-cent value, and the lid and ring has a 20 to 30-cent value.” However, you can find reusable lids from companies like Tattler. Water bath canning doesn’t require any special equipment, and if you have access to a kitchen tool library, you can likely borrow a pressure canner (They’re also available at stores like Walmart, or secondhand). Alternatively, if you know another canner, ask if you can borrow their machine. “The barrier to entry isn’t as high as most people think,” Blum says.

Though anyone can do it, it’s important to do your research before you start canning and to stick to the guidelines. “You don’t want to just invent something from the top of your head,” McClellan says. “Using recipes from reliable sources is really important, particularly in the beginning. As you get more comfortable there are ways to improvise and experiment that are safe but you need a little bit of understanding before you can do that.”

Next, you simply need to decide what you’d like to can. Most canners recommend that newbies try jam, pickles, or salsa, which can all be processed through the water bath method. Blum recommends focusing on what’s in season and taking advantage of U-pick farms. She also advises to ask about discounts, especially if you’re picking larger volumes of food.

Blum suggests that first-timers start with a small batch, and McClellan advises canning something you already like—there’s no use in making a huge supply of a jam or salsa you never end up eating. Additionally, canning is always more fun with a buddy. Done correctly, your food will last up to two years.