Home » Everyday Meals » You Can Get a Big Mac for One Cent This Week, Thanks to DoorDash

You Can Get a Big Mac for One Cent This Week, Thanks to DoorDash 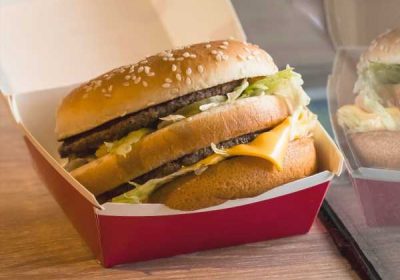 Last week, McDonald’s finally announced that it was venturing into the plant-based burger business with its new “P.L.T.,” a Beyond Meat patty topped with lettuce, pickles, white onion, mustard, mayonnaise, and ketchup, all served on a soft bun. While the new burger is only in the testing phase right now—it hit 28 Ontario restaurants on September 30—the restaurant has more exciting burger news in the meantime. On Monday, McDonald’s and DoorDash announced a special offer to celebrate their just-launched nationwide partnership—one cent Big Macs.

Yes, you read that correctly—you can score a Big Mac for just one penny. To get the deal, all you need to do is enter the code “1MBIGMAC” when you place an order on DoorDash. The offer runs from September 30 through Friday, October 4 at 11:59 p.m., and the first one million people to use the code will get the special price (plus fees—see the terms and conditions for more information). Just make sure you place your order fast—a million may sound like a lot, but the promotion will only run as long as supplies last, and we have a feeling that basically free Big Macs won’t last that long. However, even if you do miss out on the burger, there’s still incentive to use the promo code when you place your order. DoorDash explained in the announcement that customers vying for the cheap Big Macs will also be automatically entered to win $1 million. At the end of the promotion, DoorDash will select one customer at random to take home the big prize—your regular Big Mac order has never been so profitable.

The news comes a few days after DoorDash announced a security breach affecting approximately 4.9 million people. Per the company blog, DoorDash explained that an unauthorized third party accessed user data on May 4, 2019, and that users who joined on or before April 5, 2018 would be affected. The information accessed includes profile information (name, email address, delivery address, phone number), the last four digits of credit card numbers, the last four digits of bank account numbers, and driver’s license numbers—the latter affected around 100,000 users. Find out more about the breach and what steps to take if you were affected in DoorDash’s blog post.