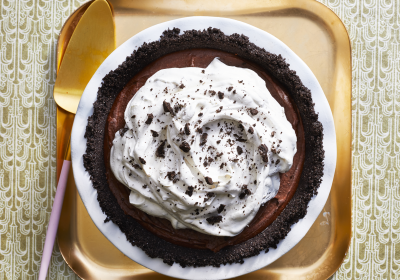 I will never sit here and tell you that making a pie isn’t intimidating, especially for less experienced bakers. Compared to a more approachable dessert, like chocolate chip cookies or brownies, pie has a lot of moving parts to get right. The bottom crust needs to be flakey and not soggy, the top crust should be cooked through but not burnt, the filling shouldn’t be soupy but also not overly set and gelatinous or goopy. And on top of all that you’re supposed to make it look nice too??

I get it, it’s a lot. That said, making a pie that’ll impress the pants off of anyone you serve it to (including yourself) is not unattainable, even for a first-time pie maker.

As long as you have a dependable recipe in hand to guide you, baking up something special really comes down to the details. And the good thing about making pie is that unlike say, doing your taxes, the details are legitimately the best part—and totally subject to your creativity. There are plenty of easy ways to set your pie apart from the pack that don’t require a culinary degree. Here are a few of my standbys:

If you’re already comfortable with your dough-working skills to pull off a classic double-crusted pie, with or without lattice work, two of the tiniest finishing touches imaginable can take your work of pastry art to another level.

Go for a Less Fussy Topping

Yes, I believe you can make a beautiful lattice top on your next fruit-filled pie if you want to, but you may not feel like tackling and mastering that play right now, and that’s totally fine. You still deserve a gorgeous pie that summons “oohs” and “ahhs” from a crowd. And that’s what ye shall have! Give one of these topping tricks a try:

Even if you’re the least confident pie baker on the planet, I can promise you that you’re going to be better off if you bypass the refrigerated box of roll-out crusts. That doesn’t mean you have to make dough from scratch, though. As we learned in our premade pie dough taste test, the real pro move is (when you don’t want to make a pie crust) grabbing a Mrs. Smith’s deep-dish frozen pie shell. This saves you from any crust crimping anxiety, and if you don’t tell anyone it’s not from scratch, they’re not gonna ask. Plus, you can apply one of the easy toppers mentioned above, like a nice streusel, to give your dessert a real homemade touch. The result is a pie that looks and tastes like a professional made it, but it low-key took you like ten minutes to throw together. NICE JOB, Chef.

And if you want a happy medium between making a pastry crust from scratch and going store-bought, consider making a crumb crust pie. And then, consider adding something a little something special to your crumbs. For example, add cheffy umph to a cookie crumb crust by adding some crushed nuts to the mix, like we do here in our perfect key lime pie.

Use Tiny Tweaks for Tastier Filling

There are certain little rules of thumb I’ve picked up through baking so many pies, and I usually apply them to whatever recipe I’m following. These tiny changes aren’t risky to the success of your pie, but they will set it apart from other pies.

See, most people aren’t going off-book when it comes to baking; however, you aren’t most people and you now have a few low-risk, high-reward tricks up your sleeve. So get after it, you lean, mean, pie-baking machine.