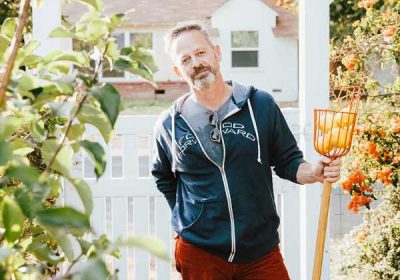 Laden fruit trees proliferate in the suburban neighborhoods of Los Angeles County. Founded in the late 18th century as a farming community, LA county was, as recently as the mid 20th century, the most abundant agricultural county in the nation. Today in LA county, more people struggle with food insecurity than anywhere else in the nation.

“There’s something very karmically wrong with this picture,” thought Rick Nahmias, founder and executive director of Food Forward, as he marveled at the sheer bulk of tangerines, grapefruit and oranges left to waste throughout LA county neighborhoods.

That “ah-ha” moment came in the winter of 2008, in the midst of the Great Recession, when increasing numbers of Americans were struggling to afford quality food.

Nahmias reached out on Craigslist and found two volunteers, and what started as a fruit gleaning project in a single backyard has grown into a systematic produce recovery program that distributes nutritious produce to over 1,800 hunger relief agencies across southern California.

Beyond the low hanging fruit

While backyard fruit trees still play a key role in Food Forward’s gleaning efforts, the group has expanded its reach to farmers markets and the wholesale produce market.

While the most aesthetically pleasing produce commands a premium price in these markets, thousands of pounds of otherwise excellent produce with superficial imperfections inevitably go to waste. According to the NRDC, approximately 40 percent of food nation wide is wasted, while 1 in 8 Americans struggle with food insecurity.

Food Forward’s first step beyond backyard gleaning, the Farmers Market Recovery Program, started at the Santa Monica Farmers Market in 2012, and has expanded to 23 farmers markets each week. Volunteers pass out donation boxes that vendors fill with unsold produce at the end of market hours. These donations are immediately trucked to hunger relief agencies, averaging 52,000 pounds of produce per month.

Louis Yepiz is Food Forward’s wholesale recovery program manager. He strikes up deals with large-scale operations in the Los Angeles Wholesale Produce Market and others, preventing food waste literally by the truckload.

“In our society, people are married to the idea of the perfect piece of produce, so if it’s not according to the aesthetics or the standards of beauty that we have for vegetables, they will not buy it at a top price,” said Yepiz. “It is better for the wholesalers to donate it than to wait a little longer, and then it wouldn’t be good for nobody—for them, for the people in need, for the environment.”

Helping people and the environment

Beyond the common-sense virtues of preventing waste to provide for those in need, there’s a clear-cut environmental benefit to the work of gleaning organizations like Food Forward. Much of the produce Food Forward collects would otherwise drop from trees and rot in yards or end up in a landfill, contributing to the food waste that emits methane, the greenhouse-warming gas.

But in 2018 alone, Food Forward saved about 22 million pounds of produce: enough to fill nearly four Olympic-size pools. All of the “waste” they collect reaches 1,800 hunger-relief organizations around Southern California.

Food Forward is a 501 (c)(3) charity that fights hunger and prevents food waste by rescuing fresh surplus produce, connecting this abundance with people in need, and inspiring others. www.foodforward.org