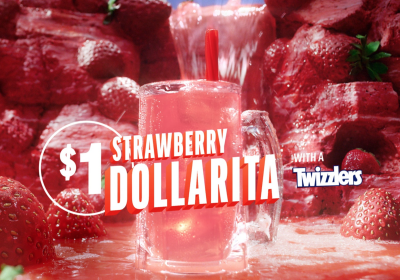 Unless you’ve been living under a rock, you know that Applebee’s has been killing the game with its Drink of the Month deals. We thought it couldn’t get better than February’s $1 Hurricanes, but then came March’s $2 Absolut Rainbow Punch to prove us all wrong.

As April approached, we waited with bated breath to find out how the chain planned to top the green apple cocktail garnished with a gummy rainbow.

April’s newly announced drink of the month is the Strawberry Dollarita, a returning favorite. Sound familiar? That might be because the Dollarita has appeared on Applebee’s menu quite a few times in recent years, most recently as August 2018’s Drink of the Month.

The $1 cocktail—made with tequila, strawberry, and margarita mix—comes in a 10-ounce mug and is available at participating locations until the end of the month.

What a time to be alive.