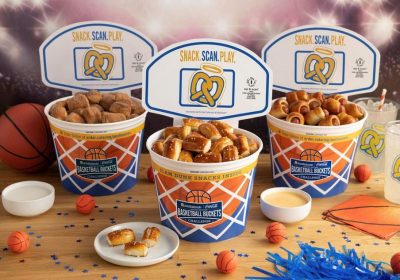 If Auntie Anne’s is your go-to spot for delicious, freshly baked pretzels, then you’ll be overjoyed to know that they’ve got something special lined up just for you. And, if you’re a basketball fan, the news of this deal will sound even better. In honor of everyone’s favorite basketball tournament (which is March Madness, if ya didn’t know!), the purveyor of pretzels is divvying out free bite-sized pretzels to 5,000 lucky fans throughout the duration of the games and if you ask me, it’s a real slam dunk of a deal.
The deal, which is only open to those who are members of the Pretzel Perks app, will see the world’s largest hand-rolled soft pretzel franchise give away one bucket of their Pretzel Nuggets or Mini Pretzel Dogs for every basket scored throughout the tournament—as long as it doesn’t exceed 5,000. And you want to know the best part? Pretzel Perks members are automatically entered to win the bucket! Super easy, right? If you’re not a Perks member yet, don’t worry. You still have time to join. Just be sure to download the app prior to the final buzzer of the March Madness championship game on Monday, April 5.
Additionally, Auntie Anne’s and Coca-Cola are giving sports fans who purchase an Auntie Anne’s Basketball Bucket online or in-store (even those who don’t have the Perks app) the chance to win a number of prizes by playing their exclusive Basketball Buckets Challenge until April 8. And if that’s not enough to send you into a frenzy, Auntie Anne’s has plenty of basketball-themed deals that you can take advantage of throughout the remainder of the month including their Free Throw Bucket Special, The 3-Pointer Special (which includes one bucket of their Original Pretzel Nuggets, Cinnamon Sugar Pretzel Nuggets, and Mini Pretzel Dogs!), and free delivery when ordering through the app on March 18-22, March 27-30, and April 3.5.
Sounds like you’ll be joining a game-winning team if you take advantage of all of these deals!
Source: Read Full Article