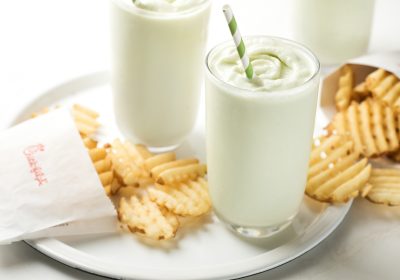 The weather’s (slowly) getting warmer, which means cold, refreshing drinks are soon going to become necessities. Luckily, Chick-fil-A has a new one they’re adding to their menu: The Frosted Key Lime.

After successfully testing in Austin, TX last fall, The Frosted Key Lime will arrive in all Chick-fil-A stores nationwide on Monday, March 18.

A sweet-and-sour twist on the lineup of frozen beverages the chain already offers—Frosted Lemonade, Frosted Coffee and Frosted Sunrise—the drink will be a handspun combination of vanilla ice cream, lemonade and a lime flavoring made from key limes, kaffir limes and Persian limes.

The drink will be “lighter than a milkshake,” according to a press release, but still creamy and sweet, and actually contains superfoods such as spirulina and turmeric, so you can feel almost healthy while drinking it. Not convinced? You can also have it made using diet lemonade, taking it from 350 calories to 280.

The chicken chain has been testing other new menu items in recent months, including a chocolate fudge brownie, peach tea lemonade and chicken sliders. They also recently rolled out nationwide delivery through DoorDash.

If you’re tching to get your mitts on one, the Frosted Key Lime will only be in stores through May 25, or while supplies last. Mark your calendars now, and enjoy every bit of sunshine you can get!