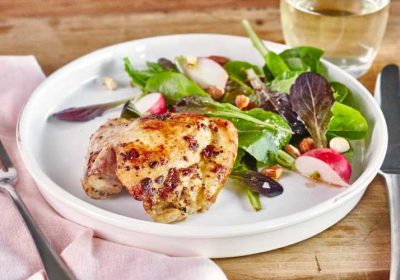 Chicken breasts are a weeknight dinner staple: What they lack in flavor they make up for in versatility and ease of cooking. They can easily be grilled or baked, so it’s no wonder this protein-rich staple frequents the American dinner table. And yet it seems that Americans are finally branching out from plain ol’ chicken breasts. These days they’re opting to cook juicier, more flavorful chicken thighs.

Bloomberg reports that production of chicken thighs is at an “all-time high” in the United States and that, according to chicken producer Tyson, “Sales of thighs have jumped nine-fold in the past decade.” Even restaurants are adding more dark meat to their menus.

People initially flocked to chicken breasts because the fat content is so much lower than in thighs (and is therefore considered the healthier option). They became easier to buy in the 1980s when grocery stores began selling the individual pieces of the chicken. Before that, only the whole chicken was available, which required home cooks to carve it up themselves.

Chicken breasts also have a reputation for tasting dry, bland, and even chewy. These chicken breast pitfalls are difficult to avoid, even among the most practiced home cooks. By contrast, chicken thighs, which are higher in fat, tend to remain moist and juicy after cooking.

In fact, chicken thighs are just as versatile as the breast. You can roast them with fennel and lemon, add them to chili or curry, or toss them in a stir-fry with your favorite veggies. There’s no limit the meals you can whip up with chicken thighs as the centerpiece. Even though tastes are changing slightly, there’s really no replacing chicken at the dinner table when it comes to convenience.

Get inspired: Our Favorite Ways to Cook Chicken Thighs (All in One Place)