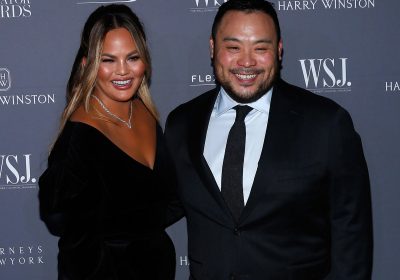 Move over Kelly and Ryan, Chrissy and David are about to serve up their own food-centric talk show for streaming service Hulu. In a deal announced today, chef David Chang and model, TV host, and Twitter queen Chrissy Teigen are set to host Family Style, a cooking-focused talk show that will be a co-production between Chang and Teigen’s companies, Hulu, and Vox Media Studios, the production arm of Vox Media which includes Eater, among other websites, under it’s umbrella.

Chang, the chef behind the Momofuku restaurant group, launched Majordomo Media last year to produce television, podcasts, and other content focusing on food and culture, including Ugly Delicious for Netflix. Teigen isn’t just a go-to source for relatable and hilarious food posts on social media, she’s also the author of two cookbooks and counts producer as another of her many titles as her Suit & Thai Productions will also be working with Hulu on other projects like scripted series and talk shows as part of a two-year deal. According to The Hollywood Reporter, the pair became struck up a friendship when Teigen became a regular at Chang’s Momofuku Noodle Bar.

“This partnership with Hulu, Vox Media Studios, and Chrissy Teigen’s Suit & Thai is a continuation of everything we’ve been chasing with Majordomo Media,” Chang said in a statement. “I’m hoping we can keep integrating new perspectives into the conversation, telling compelling stories about our culture, and trying to change people’s ideas of what food television can and should do. I think there’s an audience out there that understands and celebrates the world through food, and they’re hungry for shows that feed their sense of curiosity in new ways.”

Eater will also get its own series titled Eater’s Guide to the World, focusing on local food and culture. All of the series will appear under the new Hulu Kitchen vertical of the streaming app, though release dates are yet to be revealed.

As part of this week’s New Fronts presentations of upcoming projects by major media groups, the Hulu news comes on the heels of Netflix’s announcement of its slate of projects to be produced by Barack and Michelle Obama’s production company Higher Ground, which includes a food series for kids titled Listen to Your Vegetables, Eat Your Parents. Read more about that announcement here.