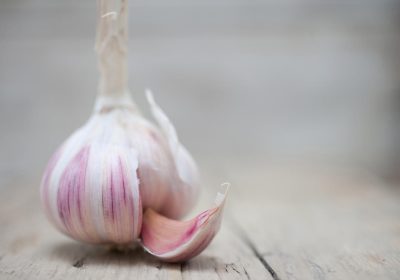 Garlic has a ton of health benefits. It has antimicrobial and antioxidant properties, boosts immunity, and can even help lower cholesterol and blood pressure. But there may be a new reason to add more of the allium to your meals, according to a new study from the University of Louisville: consuming garlic could help change the gut bacteria associated with age-related memory problems.

The study gave oral allyl sulfide—a compound found in garlic known for its health benefits—to 2-year-old mice (which correlates to people between 56-69 years old). They then compared these mice to 4-month-old mice and mice of the same age, both of which were not receiving the supplement.

Researchers found that mice who received the supplement had better memory and healthier gut bacteria than the mice of the same age not receiving it. Additionally, the mice who didn’t eat the supplement showed impaired spatial memory, more intestinal inflammation, and lower levels of a gene required for long- and short-term memory.

“Our findings suggest that dietary administration of garlic containing allyl sulfide could help maintain healthy gut microorganisms and improve cognitive health in the elderly,” said Jyotirmaya Behera, PhD, author of the study, in a media release.

We’re still learning more about how gut health plays a role in our overall health, and more research still needs to be done on how our gut microbiomes can change as we age, but it’s really interesting (and weird!) how much of our bodies it can affect—including, apparently, memory.

“The diversity of the gut microbiota is diminished in elderly people, a life stage when neurodegenerative diseases such as Alzheimer’s and Parkinson’s develop and memory and cognitive abilities can decline,” said Neetu Tyagi, PhD, co-author of the study, in a media release. “We want to better understand how changes in the gut microbiota relate to aging-associated cognitive decline.”

Overall, these new findings suggest that the allyl sulfide found in garlic helps memory by restoring our “good” gut bacteria. While this research is still in early stages, and has so far only been tested in mice, it’s still promising. There’s just one caveat: to reap the most benefits, you may want to eat the garlic raw since the memory-boosting compounds can get destroyed when cooking with it. We recommend this Garlicky Lemon-Tahini Dressing, which goes great on everything.