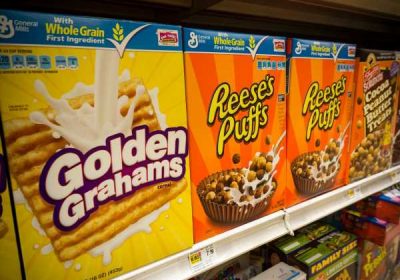 Take a walk down the aisles of the grocery store, and chances are, most boxes and bags will be prominently labeled “gluten-free,” “good source of protein,” or “made with whole grains,” among other health claims. Whether it’s a sugary box of cereal or a canister of almonds, just about every product is designed to alert consumers of the nutrients they do—or don’t—contain.

Still, you might think that you’re able to tell what’s healthy from what isn’t. But according to recent research, that advertising works better than you might think. A new study series from Vanderbilt University found these health claims on packaging really do make us see a product as healthier, even when it isn’t healthy in the slightest.

The authors of this study noted more than 80 percent of packaged snacks make health-related claims. The FDA’s current regulation of which products are allowed to be considered healthy is pretty light. Essentially, as long as they are low in saturated fat or contain at least 10 percent of just two vitamins—Vitamin D or Potassium—the FDA considers them healthy. And as long as a food contains 10 percent or more of any nutrient, it can be considered a “good source” of that thing. (Under this notion, a Dunkin’ Donuts double-chocolate donut can be considered a “good source” of iron.)

The researchers used breakfast cereals as the example for this study, which are notorious for making health claims—did you know Froot Loops are “made with whole grains?” The team created five faux brands of cornflakes with some help from a marketing research group—each box making a different health claim. Then 600 participants were given the job of picking the healthiest option for both weight loss and taste.

This study found “natural” claims proved more effective than scientific health claims about the products. Saying a product is “wholesome” or “organic” led more participants to believe the product was healthier than a scientific claim like “gluten-free” or “high protein.”

“People think organic means there’s less fat in it, less sugar, and they have association that extends beyond the actual meaning of the food,” Quentin André, lead author of the study, told Fast Company. “But organic doesn’t mean the food is healthier for you.”

However, André noted the scientific claims did have a strong pull on certain populations. For example, ”high protein” labeling appeals to those who are looking to build muscle or “gluten-free” for those with celiac disease or an apparent gluten sensitivity.

The bottom line: This study highlights the dangerous prevalence of “nutritionism,” which Michael Pollan explains in his 2007 essay, Unhappy Meals. Nutritionism differs from nutrition in that it focuses on a particular characteristic of a food rather than the food itself to determine its health status.

This ideology can easily blur the lines when it comes to processed foods, because many of them (like breakfast cereals) are fortified with a wide variety of nutrients. Just because Cheerios contain more iron than spinach doesn’t mean spinach is the lesser source here!

André (and Cooking Light!) advises ignoring the front label of any product package. Instead, go straight to the nutrition label on the back to determine if a food is healthy. The ingredients list is a sneaky gold mine, as it can show if there are hidden artificial sweeteners not divulged in the nutrition facts label and what the source of fat is for a product, for starters. Here’s a quick primer on how to read nutrition labels.