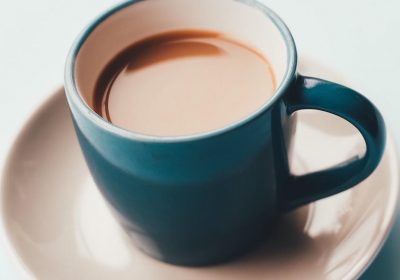 An important part of becoming fully awake for many adults involves a cup coffee.

I’m one of those adults, and I’ve been pretty happy with it. But in a recent effort to pursue a healthier, less addictive lifestyle, my husband and I (okay: my husband) made the choice to eliminate said cup of morning coffee—and other heavily caffeinated things—from our home.

Because I still wanted (or needed) to drink something coffee-like, he came home one day with a surprise: A can labeled MUD\WTR.

Why mushrooms? One of the big wellness trends of the last few years has been adding “functional mushrooms” to foods in the hopes of taking advantage of their immune-boosting, cancer-fighting properties. Our nutritionist Brierley Horton, MS, RD, says “Mushrooms do have disease-fighting antioxidants, but whether those antioxidants stay present in a hot drink and then improve your health hasn’t appeared in published research” to her knowledge. But, she asserts, they are certainly not harmful.

MUD\WTR’s developer Shane Heath boasts of other health benefits, too. As the website explains, “each ingredient was included in this blend for a specific purpose,” and the various ingredients are touted for advantages including increased alertness, stamina, focus, mental performance, an abundance of “phytonutrients,” and practically every other wellness buzzword.

In addition, the site shows off comments from a handful of customers stating how tasty it is, and how much better it made them feel. So I decided to give it a try.

With our tin of powder, MUD\WTR mailed us a list of suggested preparations. I started with the MUD MYLK, stirring one tablespoon of the powder into three tablespoons of hot water, and then adding to a cup of steamed oat milk with a tablespoon of coconut oil and a teaspoon of honey. My husband drank his black—just a tablespoon of powder in eight ounces of water.

My first sip practically took me across the globe. While I’ve never been to India, the flavors brought to mind the spice markets and colorful walkways I hear about and see in photographs.

The cacao, cinnamon and turmeric add unique layers of flavor that tone down the chai and prevent mushroom flavors from peeking through. It tasted, frankly, like a latte, which was delightful.

I had a sip of my husband’s plain cup next. It’s too spicy to be compared to coffee, but is not nearly as earthy and bitter, and is certainly much more textured and full-bodied. At the bottom of my cup, there were some gritty remnants of the mix, but it wouldn’t be hard to remove those by pouring the liquid through a mesh strainer.

Like coffee, MUD\WTR has a bold flavor and a touch of caffeine (14mg—a cup of coffee has about 95mg on average), but that’s where the similarities end, and I am OK with that.

Don’t get me wrong, I love my morning cup of coffee—but it often leaves me jittery, and I have to pee as soon as I drink a cup. Mushroom coffee, on the other hand, gave me the alertness I was after, without any of the shakiness. I also didn’t have to go to the bathroom as frequently, and because it has less caffeine it didn’t mess with my sleep cycle.

The MUD\WTR was also easy to make (you just pour the powder into some hot water.) But since I didn’t like to drink it straight, I ended up heating two liquids which meant dirtying two cups, a measuring spoon, and a spoon to stir everything together. And I had to buy oat milk and honey, which added a little extra cost to my weekly grocery bill.

Love coffee? Read these stories next:

If you’re just trying to get a quick hit of caffeine, mushroom coffee probably isn’t for you since it requires a little more time and attention. Not to mention, it can be expensive! If you get a subscription plan, it’s about $1.50 per serving (which is significantly more money than coffee beans, but much less pricey than driving through Starbucks.)

But for me, the side effects justified the cost in time and money. While drinking it, I had an unexpected—but pretty cool—side effect. I’m breastfeeding, and after drinking the mushroom coffee, my milk production increased by 100%. I don’t know if it’s because of the ingredients, or because I’m drinking less caffeine, or because I’m drinking more milk (it’s rumored to help some women with milk production), but I’m happy with the way it makes my body feel.

Want to try it out for yourself? MUD\WTR is currently sold only through their website. A 15-serving canister is $30. You can, however, use the discount code MEREDITHFS15 for 15% off your purchase until June 30.