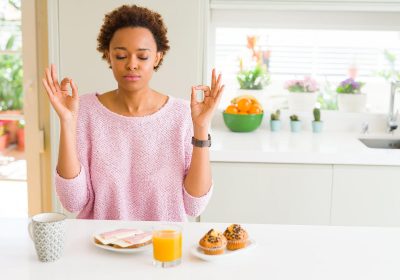 Grab a raisin—just one raisin—and put it on a plate. Now, sit down and examine the raisin. Smell it. Roll it between your fingers. When you feel you’ve fully appreciated its raisin-ness, pop it into your mouth, and consider its taste and texture as you slowly chew and swallow it.

You’ve just dabbled in the trendy practice of mindful eating: a kind of meditation in motion that’s increasingly being scientifically studied for its potential health benefits. Like other mindfulness methods, it emphasizes a judgment-free awareness of your thoughts, emotions and sensory experiences, and it helps you pay attention to a task all of us do (several times a day) but seldom stop to notice.

Some experts believe that mindful eating helps attune practitioners to many parts of the body and can therefore have benefits from the brain to the gut. Mindful eating can help connect you to your body’s built-in hunger and fullness cues—signals many of us miss when we’re distracted by TV, phones or other external stimuli, says Megrette Fletcher, a registered dietitian, co-founder of the nonprofit Center for Mindful Eating and author of five books on mindful eating. It can also help you make better food choices. “The key benefit of mindful eating is it is a sustainable approach to dietary change,” she says.

Here’s how mindful eating can help improve your diet and health.

One review of 24 studies, published in the American Journal of Clinical Nutrition, found evidence that “attentive eating” helped people eat less during meals, while inattentive eating led people to eat more during a meal and also later on.

Eating while you’re distracted seems to have effects even after you’re full. A study of TV watchers published in the journal Frontiers in Psychology found that the more engaged they were with a TV show, the more they tended to eat.

This type of “mindless” eating can also prompt you to eat more later in the day. “Distraction reduces how much attention you allocate to what you are eating, and your memory for that eating experience will be less accurate and vivid,” says Eric Robinson, first author of the American Journal of Clinical Nutrition review and a behavioral scientist at the University of Liverpool in the U.K. How well you remember your meal matters, Robinson says, because your memory of what you’ve eaten seems to play an important role in regulating your appetite.

Research has shown that asking people to recall in detail what they had for lunch leads them to eat less during an afternoon snack. Other research supports the idea that the degree of hunger you feel is dictated in part by your conscious awareness—not just by how much food you’ve consumed.

By strengthening your memory for what you’ve eaten, therefore, mindful eating may help control your appetite—and, by extension, your intake.

It can cut down on cravings

“Training in mindful eating may break the link between experiencing a food craving and indulging it,” says Ashley Mason, an assistant professor in the department of psychiatry at the University of California, San Francisco. “If we are mindful of our food craving—and mindful of how we feel after taking one bite, say, of a piece of chocolate cake—we might find fewer bites satisfying.” Mason’s research supports this notion. In a study she co-authored in the Journal of Behavioral Medicine, Mason found that when people practiced mindful eating, they ate less in response to their cravings, and this had a small but measurable effect on their weight.

Another aspect of mindful eating—its emphasis on awareness of thoughts and emotions and where they come from—could promote healthier mealtime habits by helping people tune in to their bodies. “We might realize that our food cravings are actually indicating something else,” Mason says. “Maybe we are stressed, tired or otherwise uncomfortable in some way that would be better served by an adaptive behavior that doesn’t involve eating,” like getting some exercise or taking a nap.

It may benefit your body and your gut

Paying attention to what’s on your plate may make for a healthier gut—and not just because you may be eating less. Some mindful-eating proponents say the practice encourages people to chew and savor their food more, slowing down the pace of a meal. Research has found that slow eating (and lots of chewing) helps trigger the release of gut hormones that aid digestion. A study published in the Journal of Crohn’s and Colitis found that mindfulness practices can reduce symptoms in patients with inflammatory bowel disease—most likely by relieving stress, which is an established trigger of symptoms. Other studies have found that mindful eating may help people with Type 2 diabetes by easing blood-sugar spikes and improving diet quality.

“We don’t know how much attention is required, or whether it’s possible to train people to eat more attentively in order to eat less and lose weight,” Robinson says. It’s also not yet known how much distraction is too much—or whether some types of distraction (like eating while answering email) are more diverting than others (like eating with friends), he says.

More research is needed. What is already clear, however, is that being distracted while you eat could lead to eating more overall—and that the promising benefits of mindful eating are worth paying attention to.