Kellogg’s Is Bringing Back Cinnamon Frosted Flakes…Kind Of 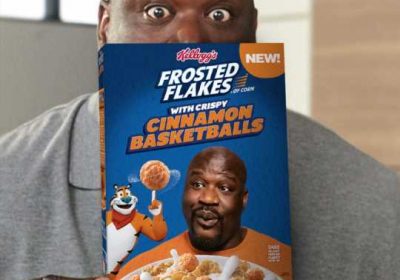 If you were one of the people who felt cheated when Kellogg’s discontinued their Cinnamon Frosted Flakes release, then buckle up, because the ride isn’t over just yet. The iconic brand, which released Mashups, Frosted Flakes with Marshmallows, and cereal bars all in 2020, just announced the release of a “new” flavor: Frosted Flakes with Crispy Cinnamon Basketballs.
Though the cinnamon-flavor aspect of the newest release may not quite be what you had in mind, what is new is the brand’s first collaborative effort with an athlete. Teaming up with superfan and Hall of Fame basketball star Shaquille O’Neal (hence the inclusion of basketballs), the one-of-a-kind collaboration marks the first time Tony the Tiger has shared the front of the box with someone else. And what better person to do it with than the man who has undying love for the sugarcoated milled corn?
Slated to be a true slam dunk, the new variation will still include the classic sweet frosted flavor of Frosted Flakes, but will also include mini cinnamon-dusted basketball-shaped pieces that pack a huge crunch. If that sounds like the breakfast of the champs in your house, you’re probably already on your way to the grocery store to pick up a box now. Before you do though, you’ll want to know that they won’t be available until April 2021. And, to add a little more insult to injury, they’ll only be around for a limited time—which means you’ll probably want to stockpile as many boxes as you can once April rolls around.
Source: Read Full Article