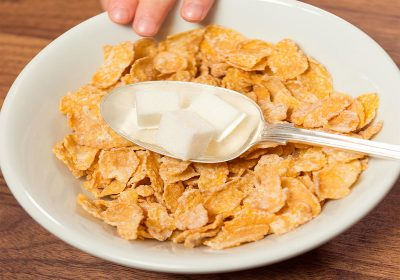 Snack bar maker KIND launched a campaign on Wednesday urging other members of the food industry to be more transparent in disclosing the sugar content and sweeteners used in their products.

The snack company created a website, Sweeteners Uncovered, which lists 99 different sources of natural and artificial sweeteners that appear on ingredient labels—many of which the average consumer has likely never heard of. Given that, most health experts agree Americans eat far too much added sugar, and that according to The Lancet, nearly 75% of packaged food and beverage products contain at least one type of sugar or low-calorie sweetener, this is pretty important information.

The site’s National Snacking Index also lists the sugar content and sweeteners used in of dozens of KIND’s competitors: Popular brands of snack bars, cereal, granola, and yogurt, as well as their own products. This may be the most surprising information to those who view many of these foods as healthy.

Related: 5 “Healthy” Restaurant Foods That Have More Sugar Than a Snickers

“We aren’t trying to demonize sugar but make sure companies are being transparent,” Keri Glassman RD, a nutritionist for KIND, told Cooking Light. “Even educated consumers can still get tripped up by the multitude of sweeteners out there. We just want to make sure consumers can make an informed decision—whether that’s finding a healthy snack or enjoying an occasional sweet treat.”

Looking through the multitude of sweeteners listed on the site can feel overwhelming: Caramel and honey are easy to spot, but what about lucuma or sucrovert? Glassman acknowledges it isn’t really easy to put together a list of the worst ones, but advises steering clear of high fructose corn syrup and any artificial sweeteners when possible.

Interested in learning more about the different types of sweeteners out there?

Glassman notes artificial sweeteners are especially deceiving, as a nutrition label may not necessarily disclose how much of an artificial sweetener is added to a product, and they can still be present in products advertising “zero grams of sugar” on the label.

While a product with artificial sweeteners may seem like a better choice, even naturally derived artificial sweeteners produce an insulin response that makes you hungry later on (or crave the actual sugar your body was tricked into thinking it was consuming), and it can even disrupt your microbiome. KIND’s products are indeed made with a variety of added sugars, but Bridgit Kasperski, Integrated Communications Specialist for KIND, says the sweeteners the company chooses to use in their foods are as natural as possible and claims they are less processed than other varieties. Some of the sweeteners the company uses are cane sugar, molasses, brown rice syrup, and honey—which Kasperski said is also useful as a natural preservative.

However, whether you’re using a natural source of added sugar, such as organic brown rice syrup or a more processed source like refined table sugar, one really isn’t healthier than the other.

“Sugar is sugar to your body,” says Cooking Light’s nutrition editor Lisa Valente MS, RD. “So while some less refined sweeteners, like maple syrup, have antioxidants—your body is processing them the same way.”

Once sugar reaches your small intestine—regardless if it’s honey or cane sugar—the body will store it as fat if there is too much sugar in your system at once. The only major benefit you’re getting from the natural options is missing out on some of the artificial ingredients that often go into refined sugar products.

The exception here is whole fruit, because it doesn’t contain added sugars—the sugar is naturally occurring. Most whole fruit provides a good source of fiber (which balances out the sugar) and some essential vitamins and minerals as well. Adding whole fruit to a snack bar as a sweetener instead of a sugar, syrup, or other form of sweetener actually slows down digestion due to its fiber content, making it the best choice for curbing your sweet tooth.

While understanding sugar content isn’t easy, Glassman says to look at the product as a whole when deciding if it’s healthy or not. She says nutrition facts are only one side of the story, as knowing the ingredients is just as vital.

This is good advice, and one that’s mildly contradicted in the KIND campaign media. For example, one of their infographics notes that Larabars have a sugar content similar to a serving of Oreos. However, the sugar content comes primarily from the natural sugar in dates (the first ingredient), whereas the Oreos contain table sugar and high fructose corn syrup.

In 2016 KIND became the first major snack brand to publish added sugar content, and last month the company petitioned the FDA to change current nutrition label regulations to emphasize nutrient quality over quantity. Glassman says that as more and more people are eating processed, packaged foods, there need to be policies to protect the consumer and help them make better choices—and she hopes this campaign empowers consumers to do just that.

Our nutritionist agrees that making good choices is important, but wishes the campaign was a little clearer. “Sugar is just one nutrient, and it’s important to be mindful of how much you’re consuming.” says Valente. “I don’t love that this campaign includes dates and milk sugar lumped into one because added sugar and natural sugar aren’t the same. I wouldn’t compare an apple to a pile of gummy bears.”

The current USDA dietary guidelines advise consuming no more than 10 percent of daily calories from added sugars, and the AHA recommends capping added sugar intake at six teaspoons for women and nine for men. Fruit sugar isn’t included in this category, as it is naturally present in the fruit itself and should be considered healthy when eaten 1-3 times a day, as advised by our dietary guidelines.

High-fiber whole fruits, such as apples, can actually help promote satiety and keep you full until the next meal—unlike sugary packaged foods, which spike blood sugar and leave you feeling hungry a few hours later.

Bottom Line: “Sugar tastes good, but it doesn’t fill you up or provide important nutrition the way other snack foods might,” Valente says. “Opting for nutrient-dense snack foods can help you stay satisfied and limiting sneaky added sugars in your diet helps make room for real treats that you can enjoy—like a brownie.”